The foundations of chemistry

Reactions: the private life of atoms

Reactions: the private life of atoms 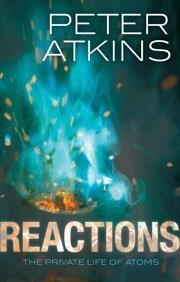 Atkins has come up with another illuminating chemistry text. He seeks to explain the fundamentals of chemical reactions in terms of electron movement, starting with the fundamental reactions, such as neutralisation, redox and catalysis.

The electronic processes involved are explained by continually asking the reader to imagine himself at atomic dimensions watching everything happen at close hand.   The text is accompanied by space-filling model diagrams designed by Atkins himself to help the reader to see what is going on. I found most - I wouldn’t say all - of these diagrams useful to visualise the processes, though I got a bit bored with their sameness. Overall the design of the book is good and I found myself wanting to read chapter after chapter. One small point is that the bad hyphenation program applied to the text splits some words in dreadful places.

After describing the fundamental reactions in the chemist’s toolbox, Atkins goes on to explain how these can be combined to construct organic molecules through such processes as polymerisation, nucleophilic and electrophilic substitutions, acid and base catalysis, eliminations etc. Finally Atkins shows how nature itself uses the same toolkit to carry out complex biological processes, like photosynthesis and food digestion, and also how the chemist can similarly synthesise complicated molecules, often using nature for inspiration.

Overall, a good book for those wanting to refresh their chemical foundations and provide new insights into familiar processes. Those from other science disciplines might also find the book illuminating and help them to see how fundamental chemistry really is. However, it is unlikely that the book would be understood by the non-scientist.