The staff of life

Bread: a slice of history

Bread: a slice of history 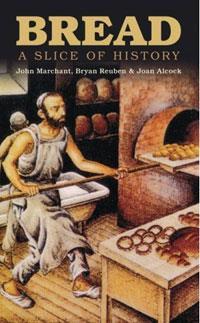 When I was a child in the 1950s, I was fed on simple white unsliced loaves which had truly disgusting crusts. Today there is a huge variety of available forms of bread from sliced white bread to bagels and from wholemeal loaves to French sticks.

Bread: a slice of history  gives an excellent account of the history of bread production and use. We see how bread was important to the Ancient Egyptians, who could be considered as the first serious bakers. We are taken through medieval times when water and wind power were harnessed to mill the grain for breadmaking. With the industrial revolution came steam power, followed by the new milling methods of the 19th century (high milling, purifiers and roller mills) which enabled millers to cope with the new ’hard’ wheats from the US and Canada.

Marchant, Reuben and Alcock show how bread provision became an important social issue in the 19th century and an equally serious problem during the world wars of the 20th century.

Changes in production methods in the last century and the replacement of the small bakers of the past with bakery giants are outlined, and the brown vs white controversy is discussed.

This book is intended for a general readership and so the chemistry is kept to a minimum in the main text; there is an appendix, however, which goes into more chemical detail for those who want to know more.

The book should be enjoyed by all those who either start the day with a slice of toast, get through the working day thanks to a round of sandwiches or who end the day with some bread and butter pudding.