Under the spell of chemistry

Having spent a number of years dressed as Harry Potter trying to enthuse youngsters about chemistry, it was with great relish that I approached this new book from a group of Singaporean science educators. It blends dazzling demonstrations with the craft and showmanship of magic. 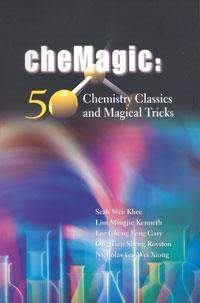 Chemical experiments can be made into magical performances

The authors should be congratulated for raising the importance of performance when trying to release that spark of imagination. Science often suffers from taking itself too seriously and the authors understand this and provide an excellent introduction which focuses on maximising dramatic effect. The book also introduces many aspects of performing that are unfamiliar to scientists: the importance of audience targeting, location, and show structure to name a few. By the time I reached the section with the actual tricks I was feeling quite enthused.

For the most part, an excellent variety of demonstrations are described, including a few that were new to me. The layout is clear and tricks are easy to find.

However, there are a number of shortcomings. First is the target audience: it would be difficult to perform a substantial number of the tricks without access to specialist chemicals. Second is safety: although each trick has safety remarks, I would have liked to see full risk assessment sheets for a text published in the UK. In some cases, the experiments are ones that are no longer recommended on safety grounds (eg  ’Blaze II’ sprays carcinogenic material in the air and should never be performed outside of a fume hood). Finally, the photographs explaining the tricks are in black and white and of very poor contrast. Video clips on a disk or via an online password would have been a substantial improvement.

Reservations aside, this is still a book I would recommend to all science educators interested in inspiring and entertaining.