A university education isn't the only way to get started in chemistry. Charlotte Ashley-Roberts discusses the advantages of learning on the job with an apprenticeship

A university education isn’t the only way to get started in chemistry. Charlotte Ashley-Roberts discusses the advantages of learning on the job with an apprenticeship 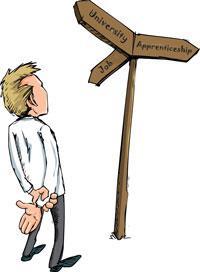 : My son is in his final year at college and is considering his options. He’s interested in chemistry and is looking at universities but we’re both concerned about the issue of university fees. Are there any other options for him to think about?

A: Chemistry is a universal currency, opening doors into a world of careers as it not only shows a scientific ability, but it also shows an enquiring mind with logical thought processes. University isn’t the only route into a chemistry career and there are many other options open to your son. The first one which springs to my mind is to look at apprenticeships. They are available in all sectors and industries and a quick look online will show you that for chemistry there are positions in nuclear, food, ceramics, manufacturing as well as laboratory and science technician posts. There are also some companies who have apprenticeship schemes in chemistry roles. AstraZeneca, BAE Systems and Unilever all operate such schemes, so it’s well worth taking a look at these.

Earn while you learn

Most apprenticeships involve working and studying at the same time, which brings obvious benefits such as being paid immediately and starting to gain that valuable work experience. But it also brings challenges, such as finding the time to fit in study and getting your work-life balance in the right place. On average, an apprenticeship takes between one and four years to complete, depending on the level you go for and the amount of time you have to study.

There are three general categories of apprenticeship:

From what you have told me in your e-mail, I imagine that your son will be looking at a higher apprenticeship. Any qualifications gained as an apprentice can help your son get to university at a later stage in his life, if he wishes to go in the future. If he did want to go to university, some employers will help to pay for a degree later on, but this would mean more part-time study.

If he didn’t want to look at apprenticeships he could look at entry level roles, those that don’t require a qualification to begin with and, again, some employers will even pay for an employee’s education, although most will require a contract to be signed or for the employee to have worked for a little while at the company before they get started. Additionally, if he chooses not to go on and do any further study he may find that he gets training opportunities within the role and as he gains more experience he may be eligible for positions of more responsibility, either within the company or outside it.

There are other options of course, but from your e-mail I think it is also worth taking a moment to address the issue of university fees. Going to university may provide him with different challenges and benefits, so you shouldn’t dismiss this option. Many universities have bursaries and scholarships for those students who will struggle financially to attend university. There is also the National Scholarship Programme which helps students whose family income is less than ?25,000 a year. Finally, there are trusts and charities that can help. You or your son can find out more through the Educational Grants Advisory Service.

Having a degree can be useful for some jobs but of course it is not essential for all. I would encourage him to think about the kinds of jobs he would like and see what kind of qualifications he needs to get into them; this might help him with his decision.

Whichever route he chooses to take, it is important to take the best one for him, and to recognise that this may change over time. He will need to review his situation at certain points but that is all part of professional development, and it certainly won’t hurt to start thinking about that, even at this early stage.