Adele Patterson is devoted to helping new chemists build their own careers but nothing will keep her out of the lab. Yfke Hager meets her

Adele Patterson is devoted to helping new chemists build their own careers but nothing will keep her out of the lab. Yfke Hager meets her 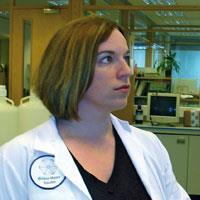 Ten years ago, Adele Patterson attended a conference devoted to skills development for analytical chemists. She was so impressed by what she saw that she volunteered to help at future events. Today, she is a senior scientist at Bristol-Myers Squibb (BMS), and a passionate advocate for the career development of young chemists.

Patterson has always loved science. ’I was very much a ’why?’ person, always asking ’why does it do that?’ she says, ’so it was really a no-brainer when it came to further study.’ Attracted by the wide-ranging ’chemistry with a specialism’ syllabus at the University of Hull, which allowed her to study chemistry with analytical chemistry and toxicology, she eventually had the opportunity of an industrial placement at SmithKline Beecham.

This led to an MSc in pharmaceutical analysis at the University of Strathclyde. ’There were some very smart people there, and I made some contacts that stood me in good stead later in my career,’ Patterson says. One of the most influential was Mel Euerby, a guest lecturer at Strathclyde and researcher at AstraZeneca R&D, Charnwood, who became her mentor and encouraged her to apply for a PhD. During her PhD at Nottingham, she discovered a true passion for lab work and gained a firm grounding in method development.

Determined to find a job that would enable her to draw on her PhD experience, Patterson applied for a job as a scientist in the analytical development section at BMS. ’I was amazed to get the first job that I applied for,’ she recalls. It’s clear that the job suited her down to the ground, as she has remained at BMS for 7 years; unusual in today’s job market, where job-hopping is rife.

The key to her job satisfaction is variety. She divides her time between developing and validating methods, instrument valuations, troubleshooting, assisting other groups, contractor training and, at all times, keeping at the forefront of science. Patterson praises the intensive collaboration between the 120 - mostly science-based - staff at the Moreton site. ’I have my finger in lots of pies,’ she says. The BMS work ethic also plays an important role. ’The company is supremely supportive of our personal development.’

At BMS she can devote company time to her second passion: raising the profile of analytical science. In her recently acquired role as co-chair of the Analytical Science Network (ASN), which represents the young analyst section of the analytical division of the RSC, she supports young scientists on their journey through industry. ’There was a time when I would look around at a meeting and I was the only one under 40 and the only girl,’ she recalls. Now, she extends a helping hand to analytical chemists on the same path. ’It can be daunting coming straight into industry after a PhD - building a network of support is especially hard when you first start out.’

Taking up the role of career development mentor with unmitigated enthusiasm, Patterson spent two years heading up the organisation of the ASN’s flagship conference, Emerging Young Professionals (EYP). Now in its 12th year, the meeting attracts up to 100 young analysts who attend to develop their scientific skills as well as soft skills such as team building, CV writing and presentation skills.

A scientist at heart

Patterson has high hopes for an initiative launching this year, a summer school to broaden young chemists’ scientific knowledge. ’Analytical chemists are expected to be a ’jack of all trades’ in industry. But they specialise in one field early on in their careers, so how can they develop knowledge of other areas of chemistry?’ she asks. The workshops and lectures at the summer school offer an answer. This year the focus is on organic chemistry. ’We have several lecturers lined up, who are doing this free of charge,’ she says. ’They are all passionate about this cause and willing to give up their time for it.’

Patterson hopes to extend this reach to an even younger target audience - she is involved in school initiatives to get children enthused about science. ’They still see scientists as a cartoon Einstein, complete with wild hair and a labcoat. I want to show them that science is exciting, fun, and really does apply to day to day life,’ she says.

Eating out, cinema, volunteering at RSPCA