Max Whitby made films about science for 20 years, then finally moved into the laboratory. He talks to Yfke Hager

Max Whitby made films about science for 20 years, then finally moved into the laboratory. He talks to Yfke Hager

Making a radical career change can be risky. But Max Whitby, who decided to become a scientist at the age of 46, has pulled it off. A former science film-maker and interactive producer with two BAFTA awards to his name, he wanted to sample life on the other side of the camera. 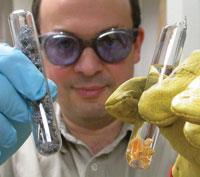 Before retraining as a scientist, Whitby enjoyed a successful media career spanning over two decades. Having completed a degree in philosophy, psychology and physiology at the University of Oxford, UK, he joined the BBC graduate training scheme in 1979. Ten years at the BBC followed, during which he rose from researcher to producer, working mainly in the science department directing Tomorrow’s World  and producing editions of Horizon.

He founded the Red Green & Blue Company, an independent production company, in 1987. A year later he returned to the BBC as senior producer at the Interactive Television Unit, where he helped launch multimedia activities and co-led the first management buyout from the BBC. ’The BBC had decided that new media was not going to take off,’ Whitby says. ’We disagreed.’ He was a founding director of the resulting MultiMedia Corporation, which floated on the London Stock Exchange. He has since been responsible for over 100 interactive projects, including websites, DVDs and museum installations.

Along the way, several projects instilled a longing to be a scientist. ’I really love science,’ Whitby says, ’and I often finished producing a project regretting that I wasn’t working in the field.’ One project in particular kindled his interest in chemistry. ’I thought it would be nice to have a periodic table,’ he says. ’Not a poster, but a real table, containing real samples of all the elements. In complete ignorance of the horrendous difficulties that this entailed, I set out to do it.’ He teamed up with ’a remarkable man in the US’, Theodore Gray, co-founder of Wolfram Research and also a dedicated element collector. They now run a joint business venture (www.periodictable.com) supplying boxed sets containing samples of the 92 naturally occurring elements, large periodic table displays and interactive installations to schools, universities and museums. ’I quickly realised this was not a project for someone without formal scientific training to undertake,’ Whitby says.

So, in 2004, he took the plunge. ’I decided to attempt a Masters first, to make sure I was still capable of studying,’ he says. Choosing a subject wasn’t difficult - he was drawn to nanotechnology because it is at the boundaries of so many disciplines. ’If you’re coming into science late, it’s a good field to choose,’ he says. ’It’s so cross-disciplinary that everyone has to learn about some of the different disciplines that it covers.’

Having settled on the MRes in Nanomaterials at Imperial College in London, UK, Whitby faced the challenge of convincing John de Mello, the course co-director, to offer him a place. ’I applied quite late in the day,’ Whitby recalls. ’John said to me: "if you come in and can explain the Schr?dinger equation to me, then you can join the course." So I took some emergency maths lessons with a friend, Fisher Dilke, and it paid off because I got in.’ Any worries Whitby had about becoming a student again were unfounded; he graduated with a Distinction. At the end of the course, he was offered the opportunity to continue his research as a PhD student in Nick Quirke’s group, which he ’jumped at’. He is now in the final year of his PhD.

In 2005 Whitby founded RGB Research, a subsidiary of the Red Green & Blue Company. RGB Research has laboratory premises in West London, where he does much of his practical work, including the fabrication of carbon nanopipes for his nanofluidics research. ’One of our discoveries is that fluids can flow through nanoscale channels remarkably quickly,’ he says. The research has potential medical applications, particularly for drug delivery. Intending to continue his new scientific career, Whitby is developing the business potential of ideas arising from his research. ’I’m hoping to move some of these ideas into the commercial realm.’

So is the grass really greener? ’One thing that has taken some adjustment is the collaborative nature of science,’ Whitby muses. ’When I attended my first conference, it surprised me that scientists share their ideas so openly with their rivals. The sense of openness is very refreshing compared with the secretive nature of business.’ As an experimentalist working alongside modellers, he highlights the value of close collaboration with other lab members. ’That, I think, is one of science’s greatest strengths.’

Yfke Hager is a science writer based in Manchester, UK.