As a chemistry undergraduate at Rutgers University in New Jersey, US, Kevin Theisen discovered he had a talent for computer programming. Now, he makes his living from both chemistry and computers – developing new software tools for chemists with his company, iChemLabs.

‘I studied chemistry because I found it interesting and easy to grasp conceptually,’ says Theisen. ‘I’d taken computer science at high school, but wasn’t so interested in it. My father advised me to take it as a minor subject at Rutgers, and it was the best thing I could have done. There are many opportunities for people with this kind of technical talent – computational skills are very useful in the job market.’ 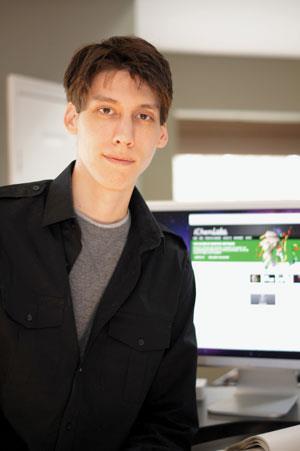 During his undergraduate studies, Theisen increasingly spent his free time programming, and realised that software development is seen as a service for the research community, rather than considered a science in its own right. ‘But it’s really important,’ he says. ‘It’s trying to apply what research has taught us to computers to optimise the way things are done in the lab, or the way we create content for chemistry. Very few people are doing this.’

Theisen particularly enjoyed Heinz Roth’s course on spectroscopy, and realised spectra are essentially puzzles to reveal chemical structures – a problem ripe for computational deduction. ‘I created an application to draw a molecule, and then simulate its proton and 13C NMR spectra,’ he says. ‘I released them online for free, and the response I got was phenomenal – it gave me the enthusiasm to mix a software career with chemistry.’ Over the next couple of years, Theisen’s interest in chemistry software tools grew. He developed the ChemDoodle chemical drawing software, which gained a lot of support in the chemistry community, and the company iChemLabs was born – all while he was still an undergraduate.

After graduation, Theisen headed out west to work on simulation methods with Berend Smit at the University of California, Berkeley. But he soon realised that pursuing a PhD and running a company are both full-time occupations. Something had to give. ‘After a year, I wrote up an MSc, and started running the company full time,’ he says. ‘It was a difficult choice, but the right one for myself and the company.’

As well as managing the company, Thiesen continues to program. ‘I do it because I enjoy it!’ he says. ‘Each new problem that comes around is more challenging than the previous one, and it’s both exciting and fun,’ he adds. ‘The company is growing, and I have hired several people this year – we now have 10 employees from all over the world – but I do still try to do as much of the creative part as I possibly can.’

ChemDoodle’s early success ensured that iChemLabs remains solely Theisen’s interest – no venture capital or other outside investment has been required. ‘We started with the product, and our creativity has been used to grow the company – we have been cashflow-positive from the moment I started selling ChemDoodle back in 2008,’ Theisen says. ‘If we don’t please our customers, we don’t get to the next month!’ He’s also turned down several buyout offers, preferring to remain his own boss. 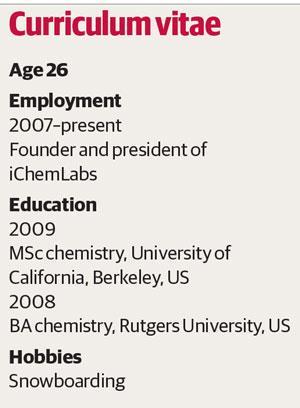 Nor has he invested in advertising, relying instead on his customer focus to generate interest by word-of-mouth. ‘The internet is an amazing thing – you can put something online that’s never been seen before, and by the end of the day people will be looking at it,’ he says.

Theisen’s advice to young people setting out on their own is to persevere in the face of failure, and to take chances while you can. ‘Just because I have been successful with iChemLabs doesn’t mean I’ve not had failures!’ he says. ‘The trick is not to let a failure make you feel bad about yourself – it just means you’ve not found the right choice for you yet. Find what you enjoy doing, and become an expert in the field. That’s the key to success. And if you have a dream as an undergraduate, that’s the time to pursue it – later in life you’ll be tied down by responsibilites and may not want to take the risk.’

Indeed, Theisen’s own plans for later life rely on this youthful drive: ‘My model is to work myself extremely hard in my 20s, and then I can relax in my 40s and do what I enjoy!’