From washing clothes to saving lives, the products of Phil Souter’s watery work can be found across the globe, as Helen Carmichael finds out

When it comes to shifting chemical innovations from the lab into the real world, Phil Souter has an impressive track record. In particular, his work on Procter & Gamble’s (P&G) ‘Purifier of Water’ sachet has already helped to bring clean water to hundreds of thousands of people in developing countries worldwide. 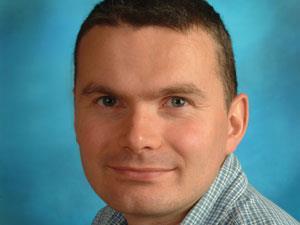 Souter started out at the University of Oxford, with a degree and then a PhD specialising in inorganic chemistry. After a brief stint doing research in the US, he moved into industry, landing a job at consumer goods giant P&G, where Souter liked the idea that his contributions would soon have an impact. ‘Consumer goods is a pretty fast moving industry, so there’s an opportunity for any innovation you create to make it to the market in a reasonable space of time,’ he says.

Two years in, Souter’s group was looking at the problem of conserving water for washing in the developing world, where clean water is scarce. The aim was to take water that had been used for washing and recycle it for rinsing, sparing users treks of several kilometres to fetch more water on wash day.

When Souter moved into a new group looking for business opportunities outside P&G’s usual focus, this experience gave him an idea. ‘I’d travelled in the developing world and seen first-hand some of the water quality problems people faced, as well as reading data collected by the World Health Organization on access to safe water. Based on my work, I thought that there was a way to meet that need, with a product that had a chance of working.’

The project kicked off with $25,000 (£15,600) in funding, and just Souter and one student working on the product – a small sachet of powdered ingredients based on the approach used by water treatment plants to clean up water. The main ingredients are ferric sulfate, which effects coagulation, and calcium hypochlorite to disinfect. It became clear that the product would work and the project quickly snowballed. ‘We went from the first experiment to the product on the market in two years,’ says Souter.

The progress to market involved clinical studies conducted with help from the US Centers for Disease Control and Prevention and John Hopkins University, in Maryland, US. ‘It was a question of validating the health effect of the product through clinical studies – there are issues around who uses the product, whether they use it correctly and proving the effect when there are other sources of contamination such as food sources in that person’s environment.’ The trials were a success, and the sachets have been distributed on a not-for-profit basis through P&G’s Children’s Safe Drinking Water Program since 2004. 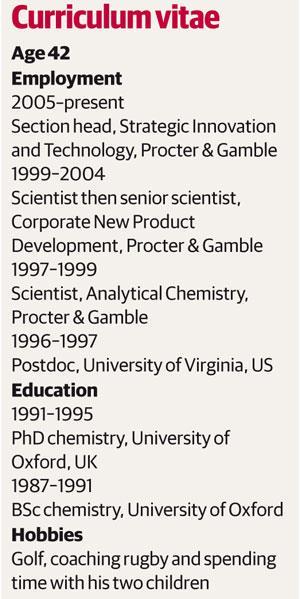 In a big company, says Souter, there are often many groups working on different problems, and it can be easy to be over-reliant on others – focusing on your part of the problem and leaving others to deal with theirs. Souter recalls the good advice of one of his first bosses: make sure that you understand every aspect of the project, whether or not it is part of your job. ‘Take a holistic view of any project you work on, identify the biggest barrier to it working, and focus on that. Otherwise you risk doing nice work on a scientific problem that may never see the light of day – and that’s frustrating!’

Souter continues to incorporate innovations into P&G products, including ingredients for more traditional laundry and cleaning applications such as enzymes, bleaches and whitening agents. In the UK, for example, the Ariel Actilift laundry brand benefited from technology Souter and his team introduced to loosen soil on clothes. Souter is currently involved in work on eight other technologies that he hopes will come to fruition in the next few years.

In the course of his work, he interacts with leading researchers in universities, institutes and chemical and biochemical supplier companies. ‘We’re working on real chemical problems, and sometimes they are quite tough,’ says Souter. ‘I enjoy the scientific challenge, as well as seeing our solutions a couple of years later – hopefully – hit the marketplace.’

As well as providing clean drinking water to many who most need it, Souter’s work has almost certainly made an impact on the products in your shopping basket. Given his current rate of innovation, it’s safe to say he’ll have a hand in many more, too.