Alan Darragh left industry behind to inspire others to study science, and now he’s helping to restart a long-lost chemistry department he tells Emma Davies

Chemistry is making a comeback at Lancaster University, UK. With the department’s reopening scheduled for September 2013 and this year’s university applications looming, Alan Darragh, the faculty of science and technology’s marketing and recruitment officer, is being kept on his toes. He is currently preparing for 250 school students to descend on the campus for a science taster day and has been working on videos, posters and brochures to promote chemistry and science at Lancaster. 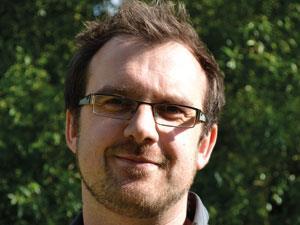 As a chemist, Darragh relishes his job and is truly delighted to see the chemistry department reopen. Growing up, Darragh was greatly influenced by his ‘very pro-chemistry’ father, a PhD chemist who worked at ICI. On leaving school he opted to study colour chemistry at the University of Leeds, UK, drawn to the course’s applied nature.  He stayed in the department to do a PhD, sponsored by Somerset-based printing company Coates Electrographics at a time when the home inkjet printer market was expanding rapidly. With a PhD goal to produce a set of water-fast dyes for inkjet printing, Darragh was happy that he was contributing something of real use.

Darragh was able to patent his ink products and enjoyed his regular trips to the Coates site, where he tested his inks. ‘It was a good introduction to life in industry,’ he says, and before he had even finished writing up his thesis, he had a job as product manager at VisionJet, a UK inkjet instrumentation company. Keen to widen his experience and ‘not just remain an inkjet specialist’, after 18 months he moved to ICO Polymers where he worked on novel ways to colour plastics. ‘It was really interesting, a different technology but still colour chemistry,’ he says.

But in his heart Darragh knew that he didn’t want to spend the rest of his career in the lab. In both of his jobs he had made every effort to involve himself in sales and marketing, seeking out work that was more ‘people-focused’.

After a brief stint working on colours for a Burnley textile company, Darragh found the opportunity he was looking for as the science partnerships officer at Lancaster University, and jumped. ‘It was a career change that I was very keen to make,’ he says. His brief was to raise the profile of science and technology at Lancaster and to build relationships with schools, with a short-term goal to ‘enthuse young people to study science and technology’ and a long-term goal to boost university recruitment.

To do this, the university holds numerous outreach events on campus. ‘The students come here to do some hands-on activities, which are all designed to be fun,’ says Darragh. Students leave thinking that it is worth working hard at STEM [science, technology, engineering and maths] subjects, he adds. ‘We are keen to do outreach work just to tell young people that science A-levels are going to require a lot of work but there will be benefits down the line.’

Since starting at Lancaster, Darragh’s workload has ‘snowballed’ as his job has been expanded and relabelled as marketing and recruitment officer. He still does a lot of outreach work and is particularly proud of the taster days, which have been a great success. At the last count, 10% of students that attended an open day went on to study a STEM subject at Lancaster, says Darragh. Many are drawn to Lancaster for its ‘small and friendly feel’, he says, adding: ‘This will carry over into the new chemistry department, where people will be taught in small groups.’

Although chemistry is included in Lancaster’s  environmental chemistry and natural science courses, the university is now making a ‘significant investment and commitment to chemistry’, reflecting the growing number of students studying the subject at secondary school, says Darragh. The new department will be ‘the final piece in the jigsaw from the portfolio’s point of view’. New staff are now being recruited and labs are being refurbished, with plans for a new departmental building for 2015.

In the meantime, Darragh is keen to hear from any of Lancaster’s chemistry alumni to discover where their Lancaster training has taken them.