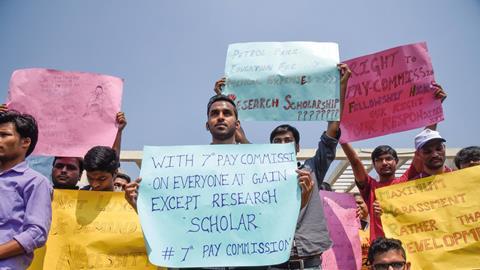 Snehangshu Patra is struggling to find a faculty position in India. He has a PhD from one of India’s most prestigious universities – the Indian Institute of Science, Bangalore – and has completed postdoctoral stints in Europe. Despite this impressive CV, he has been looking for a permanent post for 10 years.

Ganesh More, another PhD chemist, had more luck securing a position in the Indian chemical industry. Unfortunately, it turned out to be a bitter experience. ‘I was offered a job at a firm where my salary was not commensurate with my qualification,’ More explains. ‘My salary was really poor there and the Indian firms pay comparatively less when compared with multinationals.’ More left his role and took a government-sponsored postdoctoral fellowship at the National Chemical Laboratory in Pune.

Patra and More are among thousands of PhD chemists in India who face uncertainty. Since the turn of the century, the number of institutions awarding PhDs in India has tripled to around 6000. Last year, around 10,000 students were enrolled in doctoral programmes and 2000 were awarded PhDs. This unbridled growth has apparently outstripped demand.

The Indian PhD job market is ‘very challenging’, says Shyam Suryanarayan of CDrive, a specialist recruitment firm which has handled clients including L’Oreal, Huntsman and BASF. ‘Unfortunately, we are not witnessing any major expansion among Indian firms and multi-national corporations, be it pharma, chemicals or personal care. No disruptive trend in India has emerged that could drive the job market, like contract research organisations or drug discovery units.’

In India, academic jobs at public universities and research organisations are in high demand. They offer job security, good salaries, research freedom and respectability. Yet jobs at the 100 top universities, institutes and research organisations have dried up following a massive recruitment drive in the past 10 years for the new public universities, such as the Indian Institutes of Science Education and Research (IISERs) or Indian Institutes of Technology (IITs). Now, each position attracts more than 250 applications.

Thalappil Pradeep, a professor of chemistry at IIT Madras, says Indian chemistry faces a jobs crisis within five years. ‘For example, IIT Madras alone will be producing several hundred [chemistry] PhDs by 2024. The number will be massive when one takes into account all the IISERs, IITs and central universities. But there are no jobs at such institutions.’

This is a major problem, agrees K N Ganesh, the current director of the recently-established IISER Tirupati, and who was also responsible for establishing IISER Pune. ‘I have seen a 10-fold increase in number of applications for every position in chemistry departments. Sometimes, we are competing for the same talent pool,’ he adds.

For many PhD graduates, the alternative employers are not worth considering. Most private universities and colleges offer only a meagre salary to faculty members – equivalent to only a couple of thousand pounds a year – and provide no opportunity to get involved in research.

As a result, many Indian students are opting for postdoctoral fellowships in India and abroad, which is a better stepping stone for their career in academia. This has caused a rise in Indian students becoming continuous postdocs, pursuing different posts for several years without hope of a permanent role – which has led to its own problems, Pradeep argued in a column for The Hindu. ‘Finding under-employed PhDs after four postdocs is not uncommon. “Serial postdocing” makes them [too old] as above 35 is unwelcome and above 40 is a no-no for entry-level positions.’

Currently, Indian policymakers are trying to change how PhDs are viewed, repositioning them as evidence of a skillset to solve complex problems rather than a passport to an academic job. But this hasn’t been easy, particularly given the intense pressures on students who have spent almost 10 years gaining knowledge only to find their career choices are limited. Changing professions is looked down on in Indian society, so not an option many would consider.

‘There is no Plan B for students,’ says Vijay Chandru, an academic-turned entrepreneur who is now chief executive of Strand Genomics, says. ‘The ethos in academic centres pushes PhD students towards academic careers as they are trained to become a principal investigator. For most of them, the end of the process is publications.’

Inevitably, the dearth of opportunities in India has led to a ‘brain drain’, where research talent is lost to foreign universities. In 2011, this led the Indian government to sponsor the Innovation in Science Pursuit for Inspired Research (Inspire) programme, aimed at developing the next generation of faculty for Indian universities. The scheme offers contractual research fellowships for five years, with a handsome salary and research funding and the opportunity for independent research. It aims to augment high quality scientific manpower for scientific and educational institutions, specially the central and state universities, and produce the country’s future leaders.

Unfortunately, Inspire has already run into rough waters, with complaints about a lack of job opportunities at host universities, delayed release of grants and poor treatment compared with faculty members. Some reports suggested more than 1000 scientists across different disciplines have been granted Inspire fellowships – of which only small number have managed to a get job at host institutes. Last year, the problem led to fellows taking up the matter with the Indian prime minister Narendra Modi and his education minister directly.

Patra is one of the Inspire fellows. He argues his host institute doesn’t consider him an asset despite performing very well in terms of research and teaching. ‘[The host institute] did not even consider my applications for 80-odd positions it advertised recently. [Inspire] is a complete waste of tax-payers’ money.’

Abhishek Dey, from the Kolkata-based Indian Association for Cultivation of Sciences, disagrees. ‘The Inspire programme is a good initiative, but some aspects were not well thought through,’ Dey says. ‘We need to make some amends in the programme. We have a good talent pool through this programme, which needs to be nurtured.’

The greatest paradox is that the statistics don’t agree with students’ experiences. The Indian Ministry of Human Resources Development reports that around 35% of faculty positions remain vacant in IITs, IISERs and central universities. Senior administrators and faculty members have also dismissed suggestions that PhD enrolment should be regulated, arguing that the number of doctoral graduates is still very small given India’s population of 1.3 billion. Indeed, its number of awarded PhDs is less than the US, which saw 3648 chemistry and chemical engineering doctorates awarded in 2014.

Dey argues the recruitment process for faculty members at the universities (IITs, IISERs) should be reviewed. He recommends setting up a central agency, comprising experts and active scientists from different subject areas, for hiring all positions in place of hiring decisions being made by institutes. Interaction with industry should also be encouraged, including visits during the PhD course so that students get first-hand experience of problems on the ground. ‘I opted for courses in a US university that were not relevant to research,’ Dey explains, drawing from his own experience as a doctoral student in the US. ‘It provided a broader perspective of different areas, and this helped me immensely in my career.’

Pradeep highlights that engineering graduates are able to get jobs immediately on finishing their PhD, and industry can play a key role in closing the divide in employment rates. ‘Chemistry needs to be innovative in India,’ he argues, suggesting around 10% of a university’s faculty should run incubators for companies. IIT Madras has already created 160 companies on its campus.

And this could be the solution that unblocks India’s PhD pipeline. Currently, the Indian government is pushing innovation and entrepreneurship through several initiatives by the departments of biotechnology and science and technology. This has resulted in an increasing number of hubs for small businesses, such as a biotech park home to more than 1000 start-ups in Bangalore. This drive is going to require a substantial workforce – and it could be India already has a willing one waiting for their opportunity.