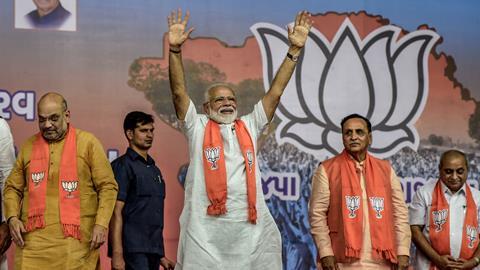 India has returned the government of Narendra Modi to power for a second time at the ballot box. Modi has been emboldened by the May elections, which gave his government a larger share of parliamentary seats and an absolute majority. But what will another five years of Modi mean for the country’s scientists?

The past five years under Modi have seen India score a number of scientific successes – the nation’s first mission to Mars, the launch of 104 satellites in a single mission and becoming the fifth most prolific publisher of scientific research with a publication growth rate of 14%, compared with a global average of 4%.

However, there has been anxiety in the scientific community too as budgets have been slashed, salaries overdue, pseudoscience proliferating and young scientists marching for pay rises.

‘The first half of the past five years dealt with recovery from a very difficult prior period,’ says Krishnaswamy Vijay Raghavan, chairman of the prime minister’s science, technology and innovation advisory council (PMSTIAC) and principal scientific adviser to the Indian government. This involved consolidation of previous projects and the start of new ones, he says.

Nearly a dozen major basic science ‘missions’ have been approved by the PMSTIAC, which opened its doors last August. These range from a supercomputing and bio-pharma mission to a chemical ecology programme, deep ocean exploration and artificial intelligence. India also made significant investment in cryo-electron microscopy and nanotechnology. ‘Many PMSTIAC missions have already got budgetary clearances and others will be processed in this financial year,’ says Vijay Raghavan.

Vijay Raghavan points out that India has now joined and pays into a number of international projects such as particle physics laboratory Cern, the European Molecular Biology Organization and gravitational wave experiment Ligo. In addition, he says that the focus on entrepreneurship and start-ups has transformed the link between academia and industry, while many new human resource programmes have been initiated and several new elite institutions created.

There has been serious criticism of Modi’s government for underfunding both science and universities, however. Vijay Raghavan says that there will now be a major funding push. ‘Budgets for science will go up even more, and industry is also going to increase its investment in R&D in a big way,’ he claims.

India’s expenditure on science and technology has been rising in gross terms. However, its share as percentage of GDP has actually been falling steadily since 2008–9, when it stood at 0.84% of GDP, to 0.69% in 2014–15 and is now stagnating.

While India and China started from a similar baseline when it comes to science, China has emerged as the second largest spender on R&D – $409 billion (£323 billion) in 2015 – second only to the US. India spent $50 billion in 2015, putting the nation sixth globally.

‘India has to do a lot more to be competitive in science,’ says C N R Rao, national research professor and honorary president of the Jawahar Lal Nehru Centre for Advanced Scientific Research in Bangalore and former science adviser to the prime minister. ‘We are way behind China which is now almost equal to the US in the quantity of science published,’ he says.

Science policy watchers have decried India’s miserly science funding and blamed poor political leadership that does not see investment in science as a priority. Modi’s first five years in power also saw a plethora of instances of politicians, Modi included, giving succour to pseudoscience and critics fear this will continue.

‘Their politics does not favour science and I will be least surprised with science budgetary cuts, as well as new stimulus to pseudoscientific nonsense and attacks on democracy,’ says Gauhar Raza, former chief scientist at the Council of Scientific and Industrial Research.

‘In order to achieve greater heights and become a top contributor to science, India will have to increase funding for science to the tune of 2% of GDP,’ says Rao. He also cautions that those at the helm of Indian science must not be swayed by self-interest or ideologies but remain dedicated to making India a scientific powerhouse.