Glenn Micalizio intended to follow a pharma career but was drawn into academia - with great results, reports Yfke Hager

Glenn Micalizio intended to follow a pharma career but was drawn into academia - with great results, reports Yfke Hager 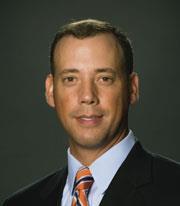 It all started with a plane in a garage. From an early age, Glenn Micalizio has been intrigued by the challenge of building complex structures from simpler components. Now an associate professor at the Scripps Research Institute in Jupiter, Florida, US, Micalizio straddles chemistry, biology and medicine to develop new strategies for the total synthesis of complex biologically active natural products. But it was his father’s unusual hobby - building a one-man aircraft in the garage - that first sparked his interest in organic synthesis.

Micalizio also credits his parents with steering him towards medicinal chemistry. Witnessing their battles with arthritis and cancer ’got my interest going in molecules that act as therapeutics’, he says. The youngest of six siblings, Micalizio worked his way through college. While studying chemistry at Ramapo College of New Jersey he worked in a photography shop, until a serendipitous conversation altered the course of his career. ’One day my analytical chemistry professor asked why I always looked so tired,’ he recalls. ’When I explained, he asked if I’d be interested in a job related to what I was studying.’ This led to a year’s internship in quality control at Ciba-Geigy Pharmaceuticals (later to become Novartis). A drug discovery position followed. ’I was surrounded by medicinal and process chemists,’ says Micalizio. ’It soon became clear that my passion and interests were suited to synthetic organic chemistry.’

Micalizio set out to forge a career in the pharmaceutical industry. ’Some of the scientists I worked with helped me select a PhD programme. I didn’t know much about the field; all I knew was that I wanted a job like they had!’ he says. Micalizio joined William Roush’s laboratory at the University of Michigan to complete a PhD in chemistry, focusing on the development and application of new chemical methods to the total synthesis of biologically active natural products. During his time at Michigan, Roush suggested that he consider an academic career. ’I hadn’t really considered this,’ Micalizio admits. ’I didn’t think it would be within my grasp.’

With Roush’s support, Micalizio secured a postdoctoral position at one of the top laboratories in the world for organic synthesis and chemical biology, working with Stuart Schreiber at Harvard University. Drug discovery efforts are greatly enhanced by the ability to synthesise collections of compounds, which are then screened to identify those that have therapeutic properties. Micalizio’s research focused on developing new synthetic methods to define unique chemical pathways to access structural diversity.

It was during his postdoc that Micalizio got hooked on the idea of pursuing an academic career. Taking advice from Roush, he had been developing plans for a potential independent research programme. He dispelled his pharmaceutical career ambitions with some trepidation. ’You never know if the science you have in mind is going to work out,’ he says. ’There’s always a significant amount of uncertainty.’ Micalizio accepted a position at Yale University - in the department where his postdoctoral mentor, Schreiber, had started his academic career. ’Yale was a wonderful experience,’ Micalizio says. ’I recruited fantastic students there.’

While Micalizio was at Yale, Roush relocated his academic laboratory from the University of Michigan to the new campus of the Scripps Research Institute. In 2008, Roush invited Micalizio to join him. ’The opportunity to join one of the world’s leading chemistry departments and work with Professor Roush again was an offer that I couldn’t refuse,’ Micalizio says. Reflecting on his first year at Scripps, he praises the institute for fostering interdisciplinary research, with organic and medicinal chemists working alongside biologists. ’I can be completely creative in my field, from asking fundamental questions to finding new pathways for drug discovery.’ His first collaboration with the pharmaceutical industry, established in 2009 with Pfizer, appears promising. ’It opens up access to areas of science that I would not have otherwise had,’ says Micalizio.

Micalizio nevertheless feels indebted to the colleagues who helped shape the course of his career. ’The support and guidance of my colleagues at Ciba-Geigy, professors at Ramapo College, and my graduate and postdoctoral mentors William Roush and Stuart Schreiber all played a critical role and opened many doors for me.’ 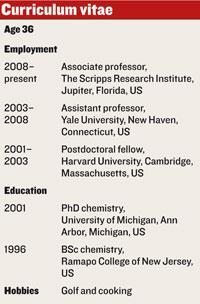