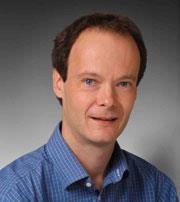 As a chemistry undergraduate at the University of Durham, UK, Christopher Pike was already developing an interest in business, and began investing his grant money in stocks and shares. He appreciated the intellectual challenges of chemistry but was not a big fan of labs or of conventional working hours.

’A pivotal moment was at the beginning of my second undergraduate year, when I decided that I wanted to get a summer job at an overseas university,’ Pike recalls. It couldn’t have turned out better. He spent two summers at the University of New Brunswick in Canada working on ab initio  quantum mechanics. The chemistry lacked ’stinky lab coats, draughty old labs and the rest’, and the work was best done overnight when the university’s mainframe computer had more availability.

This experience led Pike to a new model for working life in general: work odd hours, get much more done and faster, and create more time for play. ’This became a model for how I later structured my PhD work and my self-employed career.’

When it came to writing up his PhD, Pike discovered that he really enjoyed persuasive writing, seeding the idea of patent law as the next step. ’Patent work bridges the gap between science, business and law,’ says Pike. ’The ability to provide concise, written descriptions of inventive concepts and persuade others of your viewpoint is a key skill.’ He suggests that patent law itself is just another kind of modelling, to fit often complex scientific and business ideas within a practical legal framework.

Next, Pike trained as a UK and European patent attorney with Procter and Gamble in Newcastle, UK. The management training programme was ’highly impressive’ with young managers given plenty of responsibility from day one. Pike worked on formulation chemistry but also took opportunities to look at other angles of intellectual property (IP) such as packaging. He then took a short-term position with Rank Xerox to gain experience of IP in other business and technical areas. In 1997, he was the youngest patent attorney in the UK to set up his own practice: Pike & Co. He has since mentored other young patent professionals on a similar path.

Pike’s first instinct was to build the practice to become a major player, but once again he took the road less travelled. His earlier goals had included maximising free time and semi-retirement by the age of 40, both of which he achieved by selling the company (although keeping on a few select clients). He moved to Dorset where he lives and works today.

It hasn’t all been plain sailing. Aiming to fill a niche, Pike penned a book called Virtual monopoly  to explain the benefit of patenting from a business perspective. Despite good reviews it came out just as the dot com bubble burst and didn’t sell that well. However, there was a silver lining as the book led to some useful contacts as well as a visiting fellowship at the Innovation Unit of the Royal College of Art.

Pike is a tenacious character. He decided to train as a UK and European trade mark attorney - a very different branch of IP to patents - to help certain clients at Pike & Co. This presented a tough challenge in a start-up practice setting and he was told by some that he simply would not be able to do it outside of an established firm. Pike succeeded, getting the top mark in the country for his final trade marks law paper. ’That felt really good,’ he says.

Pike is still active in the world of patenting but it’s not all about work these days: ’At lunch I went for a long walk over the Dorset hills then gathered salad from my polytunnel,’ he says. ’Not a bad balance, overall.’ 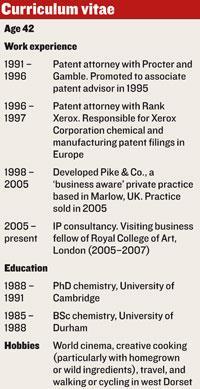