Ian Archer has his dream career as a process chemist. As head of process chemistry at Ingenza, he is now getting involved in technology transfer, as he tells Sarah Houlton

Ian Archer has his dream career as a process chemist. As head of process chemistry at Ingenza, he is now getting involved in technology transfer, as he tells Sarah Houlton

Ian Archer might have become a medic, and nearly became a chemical engineer, but realised just in time that what he really wanted to do was chemistry. The son of scientists - his dad was an immunologist and his mum a chemistry teacher - his parents were keen for him to become a doctor. However, he was more interested in science, and didn’t want to spend six years at university. ’I failed - with my PhD I was a student for just as long!’ he says. 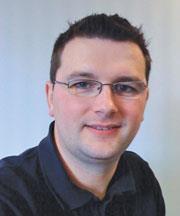 As he was interested in making chemicals, his school careers adviser suggested chemical engineering, and he went to study the subject at Imperial College in his home town, London. He lasted a week. ’I realised very quickly there was virtually no chemistry in it!’ he says. During that week, they were taken to a couple of chemical factories, and they horrified him. ’I thought I didn’t want to work anywhere like that. It’s ironic that I ended up working in one of the UK’s biggest chemical plants, Grangemouth, for six years, and loved it!’

A rapid switch to chemistry led to a PhD in biocatalysis, also at Imperial - chosen because he’d been fascinated by biology at school and fancied using both biology and chemistry together. ’I was working on directed evolution of enzymes - changing them to carry out the reactions you want them to rather than the ones they evolved for,’ he says.

After a postdoc with Nick Turner in Edinburgh, he was certain he wanted to make his career in industry, and he started work at Zeneca Specialties in Grangemouth (now Avecia). And that’s where he realised why he was confused by the careers advice he’d got at school - what he had actually wanted to do was process chemistry, not chemical engineering. ’I was interested in manufacturing from the chemistry side, not the engineering side,’ he says. ’Oddly, it turned out that at the age of 18 I did know what I wanted to do - just not what it was called!’

He gained an enormous amount of experience which has proved invaluable in his current role as head of process chemistry at Ingenza. The Edinburgh-based company uses directed evolution to create enzymes as biocatalysts for fine chemical manufacture. ’When I started, I was the only chemist,’ he says. ’Now there’s half a dozen, out of about 15 employees.’

In such a small company, Archer’s’s role is pretty varied. ’When I first arrived, I did some business development - attending trade shows and talking to customers - though I do less of that now we’re a bit bigger and have people focusing on it,’ he says. ’Maybe a third of my time is spent in the lab, sometimes working on new ideas, which I’ll hand over to the team if they look promising. A lot of what we’re trying to do isn’t well understood from a chemistry perspective to start with - the biology is a bit of a black box.’

Archer also focuses on finding new opportunities for the biocatalysts. ’I’ll look at what the best route is to make a particular compound, and where biocatalytic approaches might be appropriate - there’s a bit of healthy competition between chemistry and biology there,’ he claims. ’Typically, biocatalytic routes take longer to develop than synthetic chemistry ones, but the process you end up with is usually cheaper. There’s a lot of work involved in trying to model the relative cost of different processes, for example whether the added cost of using extra catalyst will be worthwhile because of the savings in making the reaction go faster.’

He’s also now getting involved in technology transfer (with Ingenza’s commercial partner and investor Richmond Chemical Corporation), which he’s finding especially rewarding. ’I spent two months in Korea last year transferring a process into large-scale manufacture,’ he says. ’We’ve spent five years developing it, starting with a natural enzyme taken from a bug, making genetic improvements to the enzyme and making it on a large scale and applying it in a reaction, in preparation for manufacture on a 1000 litre-plus scale.’

Archer has found that his real motivation is turning R&D into commercial applications, rather than just the science itself. ’We have spent a lot of money on R&D in the past five years, and it is really exciting that the process shows great promise in Korea. Getting it out into the plant and seeing the white powder at the end will make it all seem worthwhile.’ 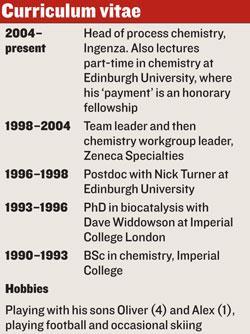