Helen Bandey faced choosing between a scientific career and the police force. But then she found the perfect job as a scientist at the Home Office, as she tells Yfke Hager

Helen Bandey faced choosing between a scientific career and the police force. But then she found the perfect job as a scientist at the Home Office, as she tells Yfke Hager

As higher scientific officer at the Home Office scientific development branch, Helen Bandey researches and develops methods for the recovery of forensic evidence from crime scenes, and contributes to best practice guidelines used by national police forces across the UK.

An early interest in forensics led to a difficult decision for Bandey. Torn between a degree in chemistry at the University of Leicester (with a sandwich year at an American university) and a degree in forensic and analytical chemistry at the University of Strathclyde, she sought careers advice. ’I was advised that a chemistry degree would set me up for a broader range of careers,’ she says. 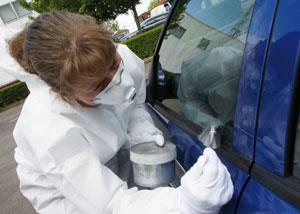 The chance to broaden her horizons swung the decision in favour of Leicester, and Bandey spent the second year of her degree at the University of Kansas, US. ’It was a fantastic year,’ she recalls, during which she found herself taking graduate courses in chemistry, since American students do not specialise as early as their UK counterparts.

At the end of her degree, Bandey was tempted to join the police force, but her love of science won out again. Joining the electrochemistry group at the University of Leicester, Bandey completed a PhD on the viscoelastic characteristics of electroactive polymer films. She jumped at the opportunity to complete some of her research at INIFTA, a theoretical and applied physical chemistry research institute in La Plata, Argentina. Bitten by the travel bug, she also conducted research at Sandia National Laboratories in New Mexico, US.

Enamoured by New Mexico, Bandey was delighted to be offered a two-year postdoctoral appointment at Sandia to further develop her PhD research. A number of national laboratories in the US had just received funding to develop new methods to detect unburned hydrocarbons in vehicle exhaust fumes for the automotive industry. Taking up the challenge to develop acoustic wave sensor technology for this purpose kindled her desire to conduct applied research. ’It was exciting to be working on real end user applications,’ she says.

When she returned to the UK, a stroke of luck steered her career in the right direction. ’The first New Scientist  I picked up had an advertisement for my current job,’ she says. It was a perfect fit for her background and interests. Bandey and her colleagues are tasked with developing innovative crime scene investigation applications and communicating these to crime scene investigators; the Home Office scientific development branch is an impartial advice service for the police.

One of her first projects involved fingerprint development using superglue (ethyl cyanoacrylate) vapours. ’Salt from fingerprints draws in moisture, and superglue vapours react with the moisture, forming visible white ridges where the cyanoacrylate has polymerised,’ she explains.

More recently, Bandey has worked with industry to develop portable forensic lasers to detect prints, and developed methods for footwear mark recovery. Transferring the techniques from the laboratory to crime scenes can be a challenge. ’We visit crime scenes to test our techniques and develop an understanding of the problems and practicalities faced by the end user,’ she says.

The techniques she develops are captured in the manual of fingerprint development techniques. ’It’s known as the "fingerprint bible" and it’s used worldwide by many organisations,’ Bandey says. In addition to updating the manual, she also teaches at the National Policing Improvement Agency. ’It’s very rewarding to help end users apply what we have developed in the lab,’ she says.

It’s clear that Bandey loves her job. ’It’s useful and valuable work,’ she says. But for those tempted by a job in forensics, she warns that it’s not as glamorous as it appears on TV. Those interested in the operational side should speak to local police forces about possible career paths, and she would advise those interested in forensics research to embark on a pure science degree. ’I don’t do much pure chemistry anymore,’ Bandey says, ’but the scientific method is still key to everything we do. A science degree will give you a good grounding.’ 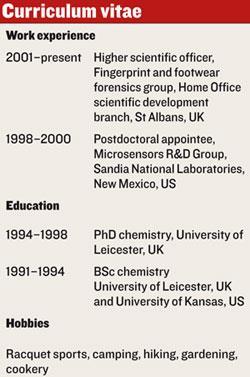