Typecasting has never been a problem for Sally Gras, whose interests have ranged from fluid mechanics and protein misfolding to cheese making, discovers James Mitchell Crow 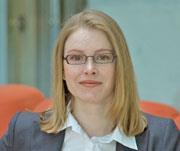 Sally Gras at the University of Melbourne, Australia, certainly isn’t stuck in a research rut. ’I get excited about a lot of different things,’ she explains. Like many scientists, Gras’s excitement was first sparked by an inspirational teacher. But she wasn’t short of scientific mentors growing up, as her parents - and many of her aunts and uncles - are also scientists. ’It has been very helpful,’ she says. ’Although I haven’t necessarily always followed their advice!’ The diversity of her research interests is one area that was shaped by suggestions from family, and seeking out mentors continues to be a theme of Gras’s career.

’I was fortunate to have opportunities to work every summer during my degree - first in aluminium smelting as part of a Women in Engineering Scholarship with Comalco [now part of Rio Tinto], then in research laboratories studying plant physiology, immunology, fluid mechanics and polymer synthesis for tissue engineering,’ says Gras. Many of these opportunities Gras engineered herself, by contacting people she was interested in working for. ’Most people were very open to these approaches,’ she says.

After graduating, Gras left Australia for the UK to study for her PhD - another seed planted by her high school chemistry teacher, who used to talk about former pupils at Oxbridge. Gras chose Cambridge, where she worked on protein misfolding, supervised by Chris Dobson and Cait MacPhee.

Gras was studying amyloid fibrils, misfolded proteins that have become synonymous with disease, particularly Alzheimer’s. ’Traditionally we have thought about these structures as just occurring in disease, but there are now a number of examples of misfolded protein structures in nature where they actually have a functional role,’ she says.

At Cambridge, Gras was studying whether such proteins could form useful materials. ’We were looking at the protein misfolding pathway to create protein nanostructures - for example, as a surface on which to grow cells,’ she says.

Following her PhD, Gras returned to Australia to the University of Melbourne, where she has continued to work on protein misfolding, among a wide variety of other things. She has recently looked at naturally functional fibrils in bacteria, which seem to play a role in biofilm formation. 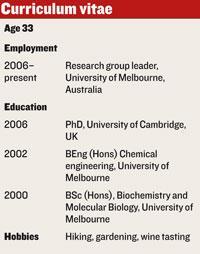 As well as seeking out collaborators, Gras has actively sought a range of mentors throughout her career. ’One piece of advice that I give my students is to seek mentors widely.’ She now plays a mentoring role herself, and not just to the students that join her research group. ’I’m a foundation member of Cambridge Australia Scholarships, which awards scholarships to Australian students to study in Cambridge. I enjoy meeting students heading off on the same path to Cambridge.’

On top of her protein misfolding research, Gras also works with industry on a range of more applied projects - including cheese making. One of the things her team is currently working on is cheese microstructure. ’We’re trying to characterise the structure, and then looking at how it changes if we make even slight adjustments to things like the pH or temperature. Even tiny changes can make a big difference to the structure, which then makes a big difference to the way that it feels in your mouth.’ Gras acknowledges that the success of her laboratory lies with her dynamic group of researchers and students who have a broad range of backgrounds equipping them for multidisciplinary research.

Gras thinks that working with industry offers some great opportunities for academic researchers. ’If you start looking, there are some big problems out there that scientists and engineers are well equipped to solve.
More generally, as a result of changes to research funding, I think we need to start thinking more broadly about partnering with industrial collaborators.’

James Mitchell Crow is a freelance science writer based in Melbourne, Australia