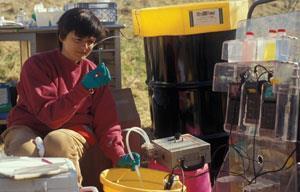 Attending a geology class during her engineering degree steered Isabelle Cozzarelli’s career in a new direction. Her subsequent decision to take up environmental sciences led to a lifelong love of geochemistry and a satisfying career at the US Geological Survey.

Science may well be in her genes. The daughter of an engineering professor and mathematics major, she recalls a very science-oriented upbringing, which resulted in Cozzarelli embarking on a geomechanics degree. ’I loved the geology courses,’ she recalls. ’That’s when I decided to study environmental sciences.’ She has always been an environmentalist, she admits. ’I’m interested in environmental applications. I enjoyed being outside and seeing that what I was studying had relevance to natural systems.’

Cozzarelli compiled a shortlist of eight graduate schools offering environmental sciences. In the end a phone call from Janet Herman, director of an interdisciplinary research programme in contaminant hydrogeology at the University of Virginia, made the choice easy. ’She had a copy of my records, and called me to invite me to work with her. I chose her program because she was so interested in me,’ Cozzarelli says. Her Masters research examined the effects of hydrologic pathways on soil-water and stream-water chemistry, with a focus on aluminium mobilisation out of soil in Shenandoah National Park.

In December 1985, Cozzarelli joined the US Geological Survey. ’I wanted to work for the public good, not for profit,’ she says. ’At USGS, we use our knowledge of chemistry to protect and manage our natural resources.’ Joining hydrogeologist Mary Jo Baedecker’s team, Cozzarelli began studying the geochemistry of aquifers contaminated with creosote and crude oil. ’We wanted to understand natural chemical transport and degradation processes,’ she says. The team’s analysis of 25 years of data on a crude oil spill in Bemidji, Minnesota significantly advanced our understanding of how contaminants migrate in groundwater. This information can be used in three ways, Cozzarelli explains. ’First, to prioritise which sites need to be cleaned up or monitored. Second, to understand how specific reactions can be accelerated, so engineers can design enhanced remediation systems. It can also help other researchers determine risk to fragile ecosystems by predicting movements of contaminants in their own systems.’ During those initial years, Baedecker boosted every aspect of her professional development. ’She taught me so much of what I know about organic chemistry and working in the field,’ Cozzarelli says.

After three years at USGS, both Baedecker and Herman encouraged her to do a PhD. ’To progress and gain a level of independence at USGS, I really needed a PhD,’ Cozzarelli says. For her PhD research, which she completed in four years while working part-time at USGS, she studied the natural attenuation of petroleum compounds from gasoline spills at a contaminated aquifer in the New Jersey Coastal Plain.

Now, as a USGS project chief, Cozzarelli coordinates a large interdisciplinary team of scientists, including hydrologists, microbiologists and geochemists, to study a landfill-impacted alluvial aquifer in Norman, Oklahoma. ’To understand such a complex system, you really need people with different areas of expertise,’ she says. She was elected as a Fellow of the Geological Society of America in 2005, in recognition of her contributions to the understanding of biogeochemical processes in contaminated subsurface environments. Looking back, Cozzarelli says, her career has definitely been shaped by the influence of Herman and Baedecker. ’They were terrific role models,’ Cozzarelli says. ’How many women have the luxury of two strong female mentors?’

Even after 23 years at USGS, Cozzarelli has no plans to move on. ’It’s really hard for me to imagine a better job,’ she laughs. ’I started exactly where I wanted to end up.’ There is one aspect she’d like to add to her job, however. ’I’d like to find a way to do more formal teaching,’ she muses.

Cozzarelli has recently taken on a mentoring role at USGS. As groundwater chemistry research advisor, she supports the professional development of 60 USGS scientists. Given her own career path, she particularly relishes the opportunity to mentor young female scientists. ’It seems to me that women gravitate towards other female scientists, and if I can help them, that makes it all that more rewarding,’ she says.