Peter Rutledge is a senior lecturer at the University of Sydney, Australia, with a research group focusing on developing antibiotics to combat superbugs and designing new catalysts. He has won a variety of awards and scholarships, most recently the Australian Institute of Policy and Science’s Young Tall Poppy award for outstanding young scientists. 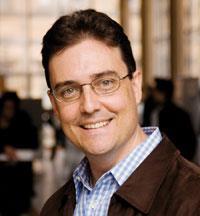 Rutledge says it all started with an inspirational chemistry teacher at high school in New Zealand who brought chemistry to life. ’When it came to making a decision, the opportunity for chemistry to make a real impact swung it for me,’ he says.

At university, Rutledge started with a fairly broad degree covering chemistry, physics, biology and maths. By his third year he had narrowed it down to chemistry and biochemistry. Choosing which to study for his honours year was a hard decision. His biochemistry professor advised him to get a good grounding and background in chemistry first and then use that to solve biological problems.

He followed this advice, and went on to work at the biological end of the chemistry spectrum for his PhD, winning a Rhodes scholarship to go to Oxford to join Jack Baldwin’s team at the Dyson Perrins Laboratory. ’Jack Baldwin is one of the giants in chemical biology. I had the opportunity to join him on his penicillin project at a very exciting time.’ About three months before Rutledge arrived they had published the crystal structure of isopenicillin N synthase (IPNS), the key enzyme in the biosynthesis of penicillin and cephalosporin antibiotics. ’That launched a whole new avenue of research that I got involved in. We were using protein crystallography, which is traditionally a static tool, in a dynamic context to probe enzymes and map out biochemical pathways in unprecedented detail.’

During his PhD, Rutledge achieved direct structural characterisation of the key intermediate in the reaction cycle of IPNS, providing the first picture of a trapped  b -lactam intermediate and allowing this important transformation to be understood in unprecedented detail. This result stands out as one of the highpoints of his early career. While at Oxford he also won the Edward Chapman prize for research.

The desire to spread his wings and have his own research group led Rutledge to Dublin. It also solved the logistical problem of living in Oxford while his wife-to-be was in Bristol. ’We wanted to live in the same town and that opportunity came in Dublin.’

His arrival was again well timed - University College Dublin was benefiting from major new investment in research. Rutledge filled a new position at the Centre for Synthesis and Chemical Biology, established in 2002. His research focus moved from the work on biological catalysis he had done with Baldwin to bio-inspired catalysis and reaction development. While at UCD he won the President’s award for research.

Despite plans to stay in Dublin for at least five years, Rutledge moved on after just three, attracted by an opportunity that had come up in Sydney. ’It was very attractive for a number of reasons. The University of Sydney has one of the preeminent chemistry schools in the southern hemisphere. I was inspired by the ethos of the school, and it was closer to home.’

He arrived in early 2006, bringing his five PhD students from Dublin. ’I was concerned that they weren’t disadvantaged by my move,’ he says. All have now finished their PhDs and two have stayed on to do postdocs in Australia.

Teaching has always been an important part of Rutledge’s role. He has recently been working with the Royal Australian Chemical Institute as its Nyholm lecturer in New South Wales. He puts on an annual roadshow for year 10 students from high schools across the region. The key challenge is selling chemistry, engaging and entertaining students while still presenting a real chemical message. ’I don’t just want to be a chemical magician. I am talking to prospective chemistry students to inspire them but also to those who aren’t going to be scientists to share with them the power of science as a force for good.’

The hard work has clearly paid off. In 2008 Rutledge was given a Young Tall Poppy award that recognises the achievements of Australia’s young scientific researchers and communicators.

Rutledge is enjoying living and working in Sydney and plans to stay for the foreseeable future, to build his research team and grow the antibiotics and catalysis projects.

Karen Harries-Rees is a freelance science writer based in Melbourne, Australia 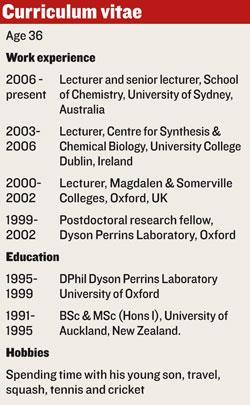