Profile: The chemistry of biological systems

From work on cancer vaccines to the hunt for TB drugs, Richard Payne's life as a medicinal chemist is far from dull, reports Yfke Hager 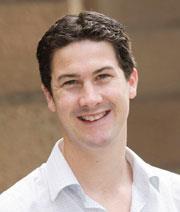 Richard Payne remembers the exact moment at which he realised he wanted to be a research chemist. While studying towards a chemistry and biochemistry degree at the University of Canterbury, New Zealand, he had landed a summer job cleaning appliances rented out to students during the academic year. After three weeks of scrubbing out fridges, Payne received a call from a professor who had just marked one of his biochemistry examination scripts. ’He asked if I would be interested in a summer research project,’ Payne recalls. Accepting the offer was to be a career-defining decision for the young chemist. ’I enjoyed doing research so much that I would have worked for free,’ he says. ’It never felt like work to me. I felt sure then that I wanted to be a researcher.’

Determined to pursue a PhD, Payne was fortunate enough to secure a Gates Scholarship, which took him to the University of Cambridge, UK. ’It was a once in a lifetime opportunity,’ says Payne, who describes his research under the supervision of Chris Abell as eye opening. Abell’s research group specialises in the rational design of small molecules that can serve as lead compounds for therapeutics. ’I was keen to use synthetic chemistry to study biological systems,’ Payne says. ’I wanted my research to be worthwhile, so developing new drugs seemed an exciting project.’ His PhD research focused on the design and synthesis of shikimate pathway enzyme inhibitors (the shikimate pathway links the metabolism of carbohydrates to the biosynthesis of aromatic compounds in plants and bacteria). Because the shikimate pathway is absent in animals, enzymes of this pathway are viable targets for the development of non-toxic herbicides, antibacterial and antifungal therapeutics. During the last few months of his PhD, Payne successfully developed a potent nanomolar inhibitor that demonstrated antibacterial activity.

Experiencing the thrill of scientific discovery reinforced Payne’s desire to launch his own academic research programme. A Lindemann Fellowship enabled him to take up a postdoctoral research position in Chi-Huey Wong’s lab at the Scripps Research Institute in La Jolla, California, US. ’I was excited at the prospect of learning about a completely different research area,’ says Payne. Shifting fields from medicinal chemistry to synthetic methodology and carbohydrate chemistry, his research interests turned to the development of new glycopeptide ligation strategies for the total synthesis of glycoproteins. ’It was a fantastic opportunity to independently design my own research projects and be surrounded by such high calibre people,’ he says.

In 2007, Payne received an email from Abell, urging him to apply for an upcoming lectureship at the University of Sydney, Australia. ’It’s a great place to start an academic career,’ says Payne, who took up his current position as lecturer in organic chemistry and chemical biology in January 2008. 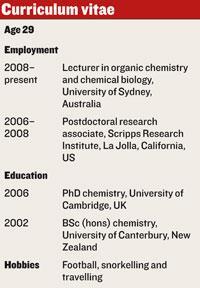 His research program is now two-pronged, inspired by his PhD experiences and his postdoctoral work at Scripps. One of the aims of his group is to develop cancer vaccine candidates. ’The glycoprotein profile expressed on the outside of a cancer cell is different from that seen in healthy cells,’ explains Payne. ’We are developing new methods to synthesise cancer-associated glycopeptides that will enable us to raise antibodies specific to these epitopes.’

Together with collaborators in the UK and Australia, Payne is also working on the discovery of new tuberculosis (TB) drug leads. ’There is a desperate demand for new drugs with a novel mode of action,’ he says. No new drugs have been approved for the treatment of TB in the past 40 years, and drug-resistant strains of Mycobacterium tuberculosis  have emerged. ’We have identified three new enzyme targets essential for the survival of M. tuberculosis, and some candidate small molecule inhibitors of these enzymes have already shown promising activity in vitro’, says Payne. ’The next step is to see how they fare in animal models.’

Payne is proud to have built a productive research group in Sydney. ’I’m lucky to have supportive colleagues and I have also been fortunate enough to have recruited a number of extremely talented co-workers who share my passion for research,’ he says. ’While I must admit that I miss my time at the fume cupboard, it’s often just as rewarding to see my students pursue my research ideas and bring these to fruition.’