Exchanging stories around the dinner table one Sunday lunch time, our host mentions a friend whose job he describes as a drugs detective. Her skill, he says, lies in being able to open a packet of white powder and work out what’s in it - not, as it later emerges, by indulging in any illicit behaviour, but by employing some well-established chemical techniques. 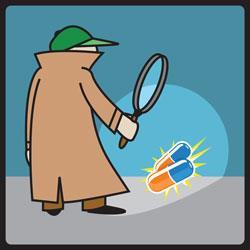 The friend-of-a-friend, is Rian Charles, a drugs analyst at LGC Headquarters in Teddington, UK. With over 500 staff working in its forensics division, LGC is the UK’s largest private sector provider of forensic services. Every day, Charles receives packages collected by police officers in the course of their criminal investigations and subjects them to various tests to try to wheedle out any substances controlled under the Misuse of Drugs Act.

Powders, pills and drug-related paraphernalia all find their way into Charles’ hands. She deals in heroin, ecstasy, cannabis and cocaine on a day-to-day basis, using familiar laboratory techniques like infrared (IR) spectroscopy and gas chromatography mass spectrometry to determine their identity.

In most cases, at least two different methods are needed to provide solid proof that an illegal substance is present. ’You’ll analyse a drug using one method, usually IR or a colour test, and then you’ll confirm it using a second method,’ Charles explains. ’So if you had a sample that you suspected was cocaine, you’d do a colour test - we use cobalt thiocyanate and if that goes blue it suggests we’ve got cocaine.
Then we carry out infrared spectroscopy on it.’

Cocaine might be standard fare, but LGC also receives samples containing compounds that the forensics team find more difficult to identify. Some of the newer ’legal highs’ (see Chemistry World, January 2012, p54) can present a challenge, says Charles, because there are no reference materials for them. In such cases, she alerts the company’s standards division, which develops and sells standards for new compounds. Recently, LGC introduced the first reference material for naphthylpyrovalerone, also known as NRG-1 - a stimulant and legal alternative to ecstasy until 2010, when it acquired class B status in the UK. 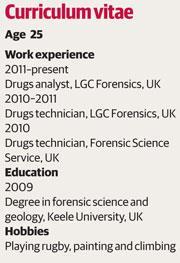 Even more concerning from Charles’ point of view, though, is a sample that doesn’t contain any drugs at all - she has to be on the lookout for anything that might pose a risk to her personal safety. Recalling a strange package that arrived recently, she says suspicions were aroused before it was even opened. ’From the way it felt and from some of the background information we’d had, there was some concern it may have had explosives in it,’ she says. ’We had to get it x-rayed before we could do any work. Once we could get the all-clear to open it, it turned out to be a mixture of class B drugs.’

So besides a calm head and a steady hand, what other qualities does a good analyst need? Passion, says Charles, who has wanted to work in forensics since school - although her initial fascination was with forensic pathology. No doubt glamorised by television, the field is competitive, so being able to show a real interest in the work - and not just the idea of it - is crucial. ’A lot of people obviously want to get into it,’ she says. ’You’ve got to want to do it for the job rather than for the benefits or to be able to say "I work in forensics".’

The UK government is winding down its Forensic Science Service (FSS) by March 2012 (Chemistry World, August 2011, p10), meaning opportunities for future forensic scientists in the UK will soon be limited to the private sector. Charles’ own experiences in the field started with the FSS - after getting her first degree in forensic science, she cut short a master’s in analytical toxicology to take the job, but moved to LGC a few months later.

Although her first degree was in forensic science, she says a general science qualification isn’t a disadvantage - quite the opposite, in fact. ’It doesn’t have to be forensic science,’ she says. ’If anything, a degree in a broader science is probably better. I think having something like chemistry or biochemistry will probably help you out a lot - at least you’ve got a back-up plan if you want to go into something else.’