Nicola Razzell left a career in banking to work for the pharmaceutical industry and has never looked back, as she tells Helen Carmichael

Nicola Razzell left a career in banking to work for the pharmaceutical industry and has never looked back, as she tells Helen Carmichael 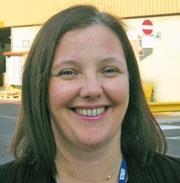 Nicola Razzell works as a principal chemist at GlaxoSmithKline (GSK) in Dartford, UK, and is product owner of its antiretroviral HIV pro-drug Lexiva (fosamprenavir). So it may come as a surprise that she initially embarked on a career in banking. Despite great opportunities, the bank didn’t measure up. ’I never really did feel I was adding value or making a difference - I was just doing a job.’ After much soul searching she finally left to do a chemistry degree.

Three years at the bank paid off - Razzell says she learned a lot about the real world and arrived at university knowing exactly where she was headed. By the end of her degree at the University of Central Lancashire, UK, Razzell knew she wanted to work in the pharmaceutical industry, because it was a career that would add real value.

Next Razzell took an MRes followed by a PhD at Southampton University, UK, in natural product synthesis. She went to a number of interviews for research jobs, but it wasn’t until she applied for process jobs that she realised she had hit on her ideal career. The focus on methodology was attractive, as well as being further downstream and so much closer to the patient. ’In manufacturing you’re having a real impact. And if you do something really well, you’re making sure that everybody gets his or her medicine.’

Working to produce HIV drugs, Razzell has seen times of shortage: ’We have had to try to cut all our costs so that medicines can be made available to developing countries at more affordable prices. It’s a real job.’

’The perception of manufacturing sometimes is that you are just running the process again and again and watching it,’ Razzell says. ’But the process of chemistry changes and gets better - we’re always troubleshooting.’ And it is the troubleshooting that fascinates Razzell, who constantly aims to produce a drug faster, better or more efficiently. ’We’re forever looking for improvements.’

Along the way Razzell has learned industry standards in operational excellence and ’lean’ Six Sigma. She started out at GSK as a process chemist in the lab, and moved on to become a lead chemist in charge of multidisciplinary teams. She picked up management skills as well as further technical and engineering knowledge as a result of commissioning a new plant. ’You are managing something that you don’t necessarily completely understand, but are getting the right people in the room to take action on time so that the whole project is delivered. That’s where my project management skills were developed.’

Razzell is the technical expert for Fosamprenavir worldwide. Communicating effectively across cultures as well as disciplines is key. ’When you’ve been very technical for a long time it’s easy to forget not everyone speaks the same language.’

Barriers to entry in this type of career are fairly high, and it is vital to prove you understand process chemistry. But softer ’people’ skills are just as important as technical know-how, as is adaptability in a rapidly shifting job landscape. Industry experience is invaluable, and placement students often return in permanent positions at a later date, says Razzell.

Being a good research chemist doesn’t automatically supply the right skills: ’Understanding process chemistry is quite different from development chemistry or frontline research. It helps if people find out earlier on which direction they need to be in and get the relevant knowledge.’ Those entering process chemistry seldom realise how tiny impurities on the research bench can quickly magnify to a major headache when dealing with 200kg batches. Another area that can come as a surprise is the importance of a potential drug’s physical properties, which determine, for example, whether it will work as a tablet or is soluble for injection.

Razzell gets a real kick out of seeing her team pull together to deliver results. She also has a wide range of career options open to her, ranging from logistics to quality or even other manufacturing industries. However, she aims to move into a more strategic position to apply her troubleshooting to issues of pharmaceutical supply and demand.

There’s no doubt Razzell has found many ways to add value in her current career. ’I may have got the people skills at the bank but I certainly wouldn’t have had the expertise - I feel like I really know something.’ 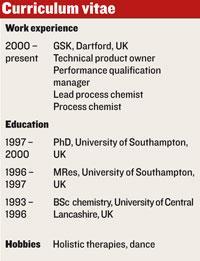