Reiko Kuroda has been tackling asymmetry her whole life, from molecular chirality to gender inequality, she tells James Mitchell Crow

Reiko Kuroda has given her professional life to studying questions of chirality. Her research spans materials chemistry through to the asymmetries that characterise the body pattern of organisms from snails to humans. But today, she is equally focused on another ‘asymmetry problem’, as she calls it – the imbalance in the number of women working in research positions in Japan.

In March 2013, Kuroda, a professor at Tokyo University of Science, was recognised for her scientific work, becoming the 2013 L’Ore´al–UNESCO For Women in Science laureate for the Asia-Pacific region. And, having worked on government committees to promote gender equality, Kuroda says that Japan’s need for programmes to support female researchers is greater than many. ‘Only 13.8% of researchers in Japan are female, and that is really bottom of the list compared to global statistics,’ she says. 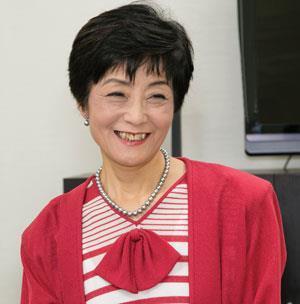 Kuroda first experienced chirality research – and that ‘asymmetry problem’ – as a PhD student at the University of Tokyo in the early 1970s. ‘I started working on chirality by chance,’ she says. ‘I was placed in a lab doing synthetic work, and learned how to use x-ray crystallography to determine absolute stereochemistry.’ At the time, absolute determination of stereochemistry was a specialist skill that few researchers possessed. Even so, her PhD supervisor was less than encouraging about Kuroda’s budding career. ‘My supervisor told me that the best thing for women is to get married,’ she says. ‘I thought there would be no future for me in Japan, so I decided to look at other places where I could go.’

Kuroda knew of the pioneering work on chirality being carried out in Stephen Mason’s labs at King’s College London in the UK. ‘I thought “I really want to work with this man”,’ Kuroda remembers. As luck would have it, the feeling was mutual: Mason needed Kuroda’s skills in determining absolute stereochemistry to characterise the metal complexes he was making.

While working at King’s, Kuroda’s interest in biology was sparked. ‘I went to the biophysics department to use their x-ray diffractometer, and talking to people there I realised that not only the chemistry but also the biology of chirality is interesting,’ she says. Kuroda ultimately moved to the biophysics department to study the interactions of carcinogens and anticancer drugs with DNA, before securing a permanent position in London at the Institute of Cancer Research. ‘I had 11 lovely years in England,’ she recalls.

In 1986, Kuroda returned to Japan to accept an associate professor position at the University of Tokyo. ‘It was the first time that they had offered the position to a woman,’ she says – an opportunity that was not to be turned down. She was promoted to full professor in 1992, the first woman full professor in natural sciences in the history of the university. She remained there until 2012 and she is now setting up a new laboratory at Tokyo University of Science.

‘At Tokyo, I extended my work to include pure experimental biology,’ she says. In particular, she studied the handedness of the coiling of snails. ‘Snail coiling is determined by a single gene locus, so one molecule determines the chirality of individual organisms, which is really fascinating. I’m getting pretty close to determining which gene it is,’ she says. The work also has implications for human body asymmetry, as the same pathway at play in snails most likely also controls the human heart’s formation in the left side of the body, for example.

As well as academic research, Kuroda has worked on many Japanese government and international science organisation panels, including as vice president of the International Council for Science, to promote science for the benefit of society.

Supporting other women in research careers has always been a focus. The challenges of juggling a research career with starting a family are particularly acute, she says. ‘For scientific research it is important to keep working, because science develops so rapidly that you cannot take one or two years off.’ Kuroda believes that, in the age of Skype and internet access to library resources, plus part-time childcare, women do not need to break off their research to have a family. With Japan’s shrinking population and contracting workforce, Kuroda says she is optimistic that the government will support such ideas. ‘We should encourage women to be more in the workplace – but I also hope that women will become leaders, which is difficult outside of Japan as well,’ she adds.

Kuroda hopes that her For Women in Science award will help to encourage more female research scientists in Japan – and will also allow her to continue her hunt for the chirality gene. ‘It is quite difficult [to secure research funding] in Japan once one gets to a certain age, with the focus on giving grants to young people,’ she says. ‘I hope that because of this recognition, they will see me working just as I always have.’