The Educated Chemist: Researchers in residence

Tom Turner is young, energetic, casually dressed and easy to talk to. In short, he’s the opposite of what your average secondary school student would expect from a chemist, which makes him perfectly suited to switching the next generation on to science.

Like three quarters of Researchers in Residence (RinR) researchers, Turner is a PhD student. The scheme recruits researchers from all areas of science and matches them with teachers in UK schools. After a training day in February last year, Turner took time out from his lab at the University of Bristol to teach a class of 11 and 12-year-olds at Ridgeway School in Swindon during Chemistry Week. Hoping to win them over with confectionary, Turner took along some chocolate bars and based his lesson around catalysts - his own specialist subject - including teaching the students about the enzymes that break down high energy foods. 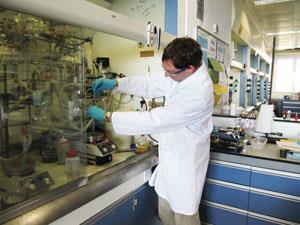 Although Turner’s students were too young to be making career decisions, he’s sure they benefited from the experience. ’I think it’s a way to inspire them to want to do more,’ he says. ’When I went on my last visit, some students were putting on a show to express what they’d learned - a review of the year - and one of the things that they mentioned was the talk that I gave on food and how they really enjoyed that.’

Helen Barley has experienced the scheme from the opposite side. She’s a science teacher at Firrhill School in Edinburgh and has played host to researchers from local universities. Her last placement researcher came from the Centre for Ecology and Hydrology, and, like Turner, wasn’t exactly what the students might have expected. ’Every time Jenny came back she’d dyed her hair a different colour and she’d come in bursting with enthusiasm,’ she says. ’I think they thought "Who’s this? She’s not a scientist!"’

Anthony Hardwicke, who recruits teachers to host RinR researchers, agrees that the scheme challenges children’s stereotypes of scientists. But it’s not just about making science look cool - the reason teachers want to get involved is because they know it will result in a ’deep, meaningful learning experience’, he says.

At Firrhill School, Barley’s students got a taste of what it was like to be a real life scientist. Their placement researcher would bring in mud samples from her PhD research and help the students to analyse and record what they found in them. Like the students that Turner taught, Barley’s were probably too young to be thinking about careers. But Barley’s colleague, Andrew Gillies, recently hosted a researcher who supervised his sixth year students during projects that would form part of their final year assessments.

Encouragingly, Gillies saw more of his students than normal go on to study chemistry following their involvement with RinR. But as he points out, it’s not necessarily about getting everyone to take up science - it’s about showing students what the options are. ’Inevitably, when some of them hit the more research-based work in chemistry they say, "Right, chemistry’s maybe not for me. I’m going to stick with another subject." And maybe that is a positive,’ Gillies says.

Researchers in Residence is today one of the Research Councils UK’s flagship projects, with over 3000 successful placements since its inception. Multiply that by the number of kids in your typical science class (around 30), says Hardwicke, and that’s a lot who have had direct contact with a researcher. But RinR is not just teaching students about science. It’s also teaching scientists about science communication. Among its alumni is Cern scientist and broadcaster Brian Cox. Asked about the scheme, Cox says it helped pave his ’way into science comms’, which, early on, was through talks in schools.

Hardwicke claims RinR’s influence has stretched even further than just the schools and researchers it has matched. ’I think you could argue that it’s had a profound effect on the way universities recruit people,’ he says. ’Before Researchers in Residence started there were no university outreach officers, or university outreach schemes.’ According to Hardwicke, many of the schemes that do now exist are spin-offs from RinR.

In the future, Hardwicke would like to see the scheme become more specialised. He says there are people in government who are ’desperate for ideas’ for recruiting scientists into shortage areas like nuclear research. By focusing on those areas, he says, RinR could help fill the gaps.

Hayley Birch is a freelance science writer based in London, UK