The Educated Chemist: Spreading the word

If you've got a passion for science you might want to consider taking your experience and enthusiasm into the classroom as a science ambassador, says Matt Brown

If you’ve got a passion for science you might want to consider taking your experience and enthusiasm into the classroom as a science ambassador, says Matt Brown

Since 2002, the Stem (science, technology, engineering and mathematics) ambassadors programme has helped over 19,000 people to pass on their experiences and enthusiasm to the younger generation.

Sharing your know-how with a school class not only offers the children a unique learning opportunity, but can also teach you something about yourself. ’I was surprised at how quickly my confidence improved and the buzz I got from doing it,’ says Mathew Waugh of University College London’s chemistry department. ’It’s also very surprising seeing the different abilities of students. You can be teaching 14 year olds one week who grasp the theory and questions perfectly, then an AS-level class the next week who really struggle. It really demonstrates the importance of how we are taught at school and attitudes towards learning.’

Waugh is in his second year of a materials chemistry PhD at UCL. He has now taught in around 10 schools in London, and has learned to bring his first-hand experience to bear when teaching complicated subjects. ’The main activity we lead is called Spectroscopy in a suitcase,’ he says. ’We take a small infrared spectrometer into the school with some unknown substances. The students learn about running and analysing IR and mass spectrometry data, and how [these techniques] work. They then have to solve a murder mystery-type workshop problem by figuring out which chemical killed the victim.’

The ambassadors programme is managed by Stemnet (Stem network) and is open to anybody with Stem skills, from technicians to professors and industry leaders. Participants work with people aged 5-19 to excite and encourage young learners into considering Stem qualifications and careers. Projects are as diverse as the volunteers’ backgrounds, from building simple rockets to coaching in business and presentation skills.

Ambassadors also play an important role in offering teachers and students a new perspective on how curriculum science is applied in the working world. Claire Germain is a forensic examiner at LGC Forensics in Teddington, Middlesex. After independently giving a talk about forensic science to a school class, a friend suggested that she might like to join up to the Stemnet programme. With active encouragement from her company, Germain has given many presentations and career talks at schools in and around London.

She particularly enjoyed enthusing the children about forensics. ’The first perception of students is that "science is a hard subject and I will not be able to get anything interesting from it,"’ she says. ’The students then become more interested as they realise that there are exciting jobs within science; forensics is very popular.’ Germain feels that her Stemnet work has brought rewards. ’I have gained confidence. Presenting to students is a tough experience and needs plenty of practice because they are a hard audience to keep interested. Being a Stem ambassador has given me enthusiasm to do more events like these and also gives me a sense of pride about my job.’ 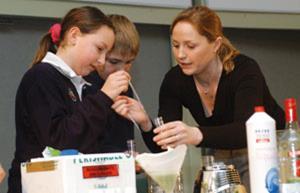 Waugh has also found the younger audience to be a tough one but has developed his own approach. ’I don’t agree with the notion that scientists are perceived as old men in white coats with big hair. Younger generations are perceptive enough to dispel this myth very quickly.’ But he does think that they find engaging with science very difficult, as it is often unnecessarily enshrined in mathematics and complex jargon. He believes that the key to explaining abstract ideas lies in visual demonstrations. Waugh’s involvement with the Stem ambassadors programme has piqued his interest in science education and communication, to the point where he’s considering getting more involved in this area after his PhD.

Stem ambassadors don’t just give presentations and run workshops. Waugh has also acted as a judge at primary school fairs. Germain, meanwhile, was asked to participate as a guide at the recent Big Bang science careers fair in London. She’s very enthusiastic about the opportunities the Stem ambassadors programme has given her.