How far back in time can you take your knowledge of chemistry? John Bonner talks to the experts

How far back in time can you take your knowledge of chemistry? John Bonner talks to the experts

Chemistry skills are central to archaeological investigation. Beyond carbon dating, the list stretches from measuring phosphate levels in soil; to identifying sites used for burying human remains; to analysing lipid residues on fragments of pottery in order to determine what vessels were originally used for.
Uncovering new information about the lives of our ancestors holds a fascination for most of us, irrespective of our chosen academic discipline. So it is not surprising that many chemists have looked for ways to combine their scientific training with an interest in archaeology.
But is it possible for someone to make a proper career in archaeological chemistry? Yes, say experts in the field, not only in the academic world but also in the field of ’commercial archaeology’. Commercial archaeology includes companies that advise local authorities and property developers on the archaeological significance of building sites, an essential safeguard of the planning process.
However, chemistry graduates considering jobs in this area must be aware that the opportunities are few and the competition to fill them intense. Sebastian Payne is chief scientist with English Heritage, the government agency that is Britain’s largest employer of archaeological expertise. He estimates that there are about 6000 professional archaeologists in the country, of whom less than 10 per cent have any form of scientific training.
Apart from universities and national agencies like English Heritage, the major employers of technically-trained archaeologists tend to be regional museums. Commercial consultancies are usually small companies established by those with conventional archaeology training who buy-in specialist outside help when necessary.
An essential requirement for a chemistry graduate wanting a job in this field would be a postgraduate qualification. Several UK universities including Bradford, Nottingham, Sheffield, UCL and York offer masters programmes in archaeological sciences. Others provide postgraduate training in relevant fields such as the organic geochemistry unit at the University of Bristol. Postgraduate training in advanced analytical techniques can provide transferable skills useful in other areas where scientific evidence is used to provide clues about human behaviour, such as the forensic science service.
That is just as well, as scientists with postgraduate qualifications must still compete with candidates from other disciplines for those rare vacancies for career archaeologists. ’There are lots of jobs in archaeology where having some chemistry is important. But it is probably more typical for an archaeologist to pick up some chemistry than for a chemist to come in and learn the necessary archaeology,’ warns Payne.
Yet there are many researchers like Richard Evershed at Bristol who have made significant contributions to archaeology, while firmly rooted within a chemistry department and maintaining responsibilities for research and teaching in mainstream science. They have ready access to the sort of costly analytical equipment that is only available in a pure sciences department, which has been important in forging collaborations with archaeologists outside. 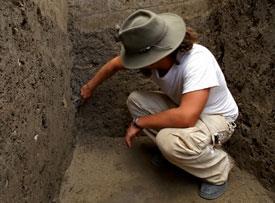 One area closely linked to archaeology where there will be increasing career opportunities for chemists is conservation science - understanding the processes causing deterioration of an object and finding ways to prevent it. Knowledge of chemistry underpins efforts to preserve historical artefacts and a wide range of other objects - such as artwork, books, textiles and buildings. It is recognised that the conservation of our cultural heritage is important for economic, as well as emotional and intellectual reasons, as the money generated by visitors to museums and historic buildings makes a major contribution to the national economy. The Arts and Humanities Research Council’s Science and heritage programme launched earlier this year will provide ?8 million over five years to support research efforts in this area.
Scientists choosing to make a career in archaeology or the broader ’heritage industry’ will come up against an uncomfortable truth, that the salaries offered will usually be meagre even by academic standards. So what would encourage someone to take a job that will often involve long hours and physical discomfort - standing ankle deep in mud in the driving rain - with little prospect of being properly rewarded for one’s pains?
Gary Taylor is a project manager with one of the private consultancies, Archaeological Project Services in Sleaford, Lincolnshire, and began his career as a chemist. He acknowledges that he had to lower his salary expectations when he made the decision to switch to archaeology. ’What makes it worthwhile is the intellectual stimulation. There is a great sense of discovery when you work on an archaeological site. Of course, when you open up the ground, you have done your homework but you really have no idea what exactly you will find.’

John Bonner is a freelance writer based in London, UK