The insider: From ivory tower to global powerhouse 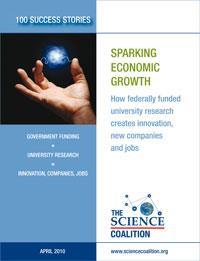 The Science Coalition, which represents 45 US universities, including Princeton, Harvard, Stanford and Massachusetts Institute of Technology, was founded to expand the federal government’s investment in university-based scientific, medical, engineering and agricultural research. In the words of its mission statement: ’Sustained support for research across the entire range of scientific disciplines is the most important step the nation can take to maintain America’s position at the forefront of scientific discovery, technological innovation, and economic growth in the 21st century.’

When public money is invested in university-based basic research there is a tremendous return on investment. The Science Coalition provides a reminder that research creates jobs directly for those involved and indirectly for many others, through innovations that lead to new technologies, new industries and new companies.

’University-launched start-ups can be powerhouses for value creation, becoming public companies at a far greater rate than the average for new businesses,’ says Krisztina Holly, vice-provost for innovation at the University of Southern California, another coalition member. ’Higher education can play a crucial role not just in spurring pioneering ideas, but in creating entrepreneurs who turn breakthroughs into innovations.’

Last year, the Science Coalition published a report Sparking economic growth: how federally funded university research creates innovation, new companies and jobs. The report identified 100 companies that are the result of federal investments in basic research. Each company was self-selected by coalition member universities and the report’s authors are quick to point out that they represent only a smallselection of the many companies that are
the result of government funded university-based research.

’There is no question that the public benefit gained from funding basic research is exponentially greater than the initial investment,’ says Susan Desmond-Hellmann, chancellor of the University of California San Francisco.

The 100 companies identified in the Sparking economic growth  report trace their founding to breakthrough research conducted at a university and sponsored by a federal agency. These success stories include global industry leaders like Google, Genentech, Cisco Systems, SAS and iRobot, as well as relative newcomers such as the AIDS vaccine developer GeoVax Labs, based in Smyrna, Georgia (Chemistry World  , August 2008, p15), and Sharklet Technologies, based in Aurora, Colorado, which has developed a material that mimics the antibacterial properties of shark skin.

The report illustrates the substantial economic benefits the US reaps when companies are created as a result of discoveries in federally funded university laboratories. One example of this return on investment is TomoTherapy Incorporated, based in Madison, Wisconsin. A $250 000 grant from the National Institutes of Health’s National Cancer Institute to two researchers at the University of Wisconsin-Madison enabled the development of the core technology behind TomoTherapy: a radiation therapy system that targets cancerous tumors while minimising exposure and damage to surrounding tissue. Each year the technology is used to treat the tens of thousands of difficult-to-treat cancer patients around the world. ’That original investment generates many times its value in salaries and taxes returned to both the US and Wisconsin governments,’ says University of Wisconsin-Madison professor and TomoTherapy co-founder and chairman Rock Mackie. TomoTherapy employs 600 people.

The Science Coalition’s report is available at www.sciencecoalition.org/successstories/ along with a database of companies created from federally funded university research.

The searchable database also allows users to sort companies by federal funding agency, university affiliation, type of innovation, number of employees and a variety of other parameters.

The database will be updated periodically with additional success stories; its owners intend it to be a ’living’ resource of examples of companies created from government funded university-based research.