The insider: Scientist in the city

Accountancy and academic science might pretty far apart , but a surprising number of graduates leave the bench each year in favour of a desk in the city, says Matt Brown

Accountancy and academic science might pretty far apart , but a surprising number of graduates leave the bench each year in favour of a desk in the city, says Matt Brown 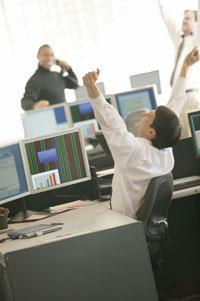 ’It was a gradual decision based on the working environment, the diversity of the job (or lack of), the uncertainty on the career path available and the low pay and temporary contracts of employment,’ says Rob Taylor, a one-time biochemistry PhD student at the University of Sheffield who now works as a senior manager in the infrastructure advisory section of Ernst & Young, based in London, UK. ’I decided to look outside science and found things that looked interesting. I enjoyed what I did, but not enough to make a long-term career of it.’

Taylor is one of hundreds of scientists who make such decisions each year. According to the Institute of Chartered Accountants in England and Wales (ICAEW, also known as ACA), over 500 scientists started their ACA qualification course in 2009, representing over 10 per cent of all those who enrolled. While a trainee accountant won’t be handling rotary evaporators or running gels, he or she will be using some of the same skills. The ICA want graduates who show: ’commitment, self-motivation, teamwork, excellent verbal and written communication, problem-solving skills, commercial awareness and a willingness to learn are all core skills that employers will be looking for you to demonstrate,’ says Taylor. Which, apart perhaps from commercial awareness, might be a description of a typical PhD student.

’Some of the [lab] skills were extremely useful,’ agrees Taylor. ’Not least the analytical, presentation and, to some extent, the writing skills. I also felt more confident than some of my peer group as I had done a few years in the work environment. People start in the world of accounting from all sorts of backgrounds and if you start at the bottom, you aren’t expected to know much. Most of the training was on the job.’

Taylor took the ACA course in chartered accountancy - not the only way into an accountancy career, but the most common in England and Wales. The ACA typically lasts 3 years and takes applicants from all academic backgrounds. Even those who study financial or economics subjects at university have to take this or a similar course, so science graduates are at no significant disadvantage. The ACA is normally undertaken while under employment at an accountancy firm, and most companies provide additional coaching on top.

Neil Robinson is another scientist who took this route. After completing a first degree in biochemistry at the University of Cambridge in 2000, Robinson jumped straight into the financial world. He now works for PricewaterhouseCoopers as a senior manager in transaction services - in layman’s’ terms, when a client is buying a company, he assesses what they are buying, what that business is capable of, and ultimately helps them determine if the price they are paying is fair. It’s a far cry from studying the Krebs cycle but Robinson finds that his science training is not put to waste. ’The analytical skills I used during my degree are key to getting under the skin of a business and for drawing relevant conclusions that add value to our clients,’ he says.

Lifestyle factors were the clincher in his decision to leave the lab. And financial reward played a part, too: ’a professor I worked with on my dissertation was at the top of his career and profession and he didn’t earn that much. I just knew I didn’t want to live like a student for years to come.’

Such a career move clearly has its financial advantages, but what might you lose out on by leaving science? ’There is significant scope for creative thought in science - less so here,’ admits Robinson. ’The intrinsic importance of science, in my opinion, makes it much more valuable than anything accountancy related. At best, we create value for our clients - they love us for it - but do we make lives better, solve the world’s great problems? Probably not.’

Taylor also misses science sometimes, but feels he made the choice after appropriate deliberation and has no regrets. ’My advice would be to ensure that you take the time to make your decision and clearly set out the pros and cons of staying in academia, going into industry or leaving the field for good.

’I don’t think I would have done anything different if I had my time again. I’m glad and proud I did my PhD even though it meant I was older than most starting a new career. But what is 3-4 years when your working life might be as long as 50 years?’