The science of team science 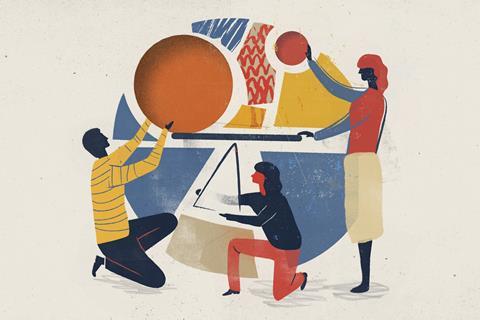 Managing a team requires a careful balance contributions from all participants

In the popular imagination, science is carried out by lone geniuses, waiting for their eureka moment. In reality, that has never been the case – science has always been a team sport. But as researchers try to tackle ever bigger and more interdisciplinary problems, team work is becoming more important than ever. Optimising ‘team science’ endeavours has become an area of study in its own right as universities and funders try to understand how to get the best outcomes from scientific teams.

‘We know very little about scientific teamwork,’ says Stephen Fiore, a cognitive psychologist at the University of Central Florida who has specialised in understanding team performance. In the last decade he has turned his attention to the science of team science, working with the US National Academies of Sciences. ‘I realised that this was a huge gap – those of us who study teams had not really studied science teams,’ he says.

Defining team science isn’t always easy given so much of science is collaborative. ‘There is no single definition but it aims to cover any situation where more than one person is contributing to a research project,’ says Daniel Smith, EPSRC Head of Physical Sciences. It usually denotes large projects that cross institutions, disciplines or sectors.’Perhaps the biggest difference is the people focus,’ adds Smith. ‘It’s not just about the academics and postdocs. It’s about the whole team including, for example, technicians, project managers and skills specialists who are brought in to provide expertise on a specific aspect.’

Working in large teams certainly presents additional challenges, as radiochemist David Read from the University of Surrey knows. Read is currently part of the Transcend (Transformative Science and Engineering for Nuclear Decommissioning) five-year collaborative research programme, following on from two similar EPSRC initiatives going back to 2008. The projects all involved multiple universities and industry partners.

Read says these projects were all successful, unlike some other science teams he has been involved with, ‘where the intentions are great, and the people involved are very good, but they end up being a little more than talk shops.’ He puts this success down to the excellent leadership of Michael Fairweather at the University of Leeds: ‘He sets the tone, but he doesn’t micromanage, he leaves people to get on with their own stuff and … the work and the responsibilities are shared out fairly so everyone feels they’re getting a fair crack.’

Leadership was also important for the GlycoTrackers project, a two-decade-long team effort to develop chemical tools to map glycans in living cells. ‘It was driven by Carolyn Bertozzi (from Stanford University). She had this really clear idea about what [the team should] do, but she [gave] people the freedom [to decide] how to do it … that was combined with a very motivating atmosphere [which] makes people develop their own ideas on how to implement things,’ explains team member Ben Schumann, from the Crick Institute, UK, who became involved in the team as a postdoc at Stanford.

But even with good leadership, bringing different scientists together will pose problems. ‘Where data analysis of productivity has been done, you find that even with a well-constructed interdisciplinary team, they’re often quite slow to get going in terms of output, because there’s a lot of work upfront, getting everything organised and running well,’ says chemist Angus Wilkinson, from Georgia Tech in Atlanta, US. He has looked at these issues as part of an initiative to integrate team science skills into graduate training.

A big issue is dealing with the differing perspectives of researchers from varied disciplines and ensuring they communicate effectively with each other. ‘One of the first things that will come up is the language problem,’ says Fiore. ‘Different fields have different terms for the same concept, or they have the same concept that means different things.’ Fiore says active listening is ‘probably one of the most crucial elements of teamwork when working across disciplines.’ This means making sure you understand what you are hearing, and not being afraid to ask for clarification. ‘Even though that sounds simple, that’s a really a complicated, dynamic and complicated behaviour to enact.’

The most successful teams create an environment of psychological safety

For Schumann, trust was at the heart of their successful team: ‘From a team perspective, the environment at Stanford was very good, because you have experts in all these fields just around the corner, so we could easily reach out.’ The most successful teams create an environment of psychological safety, explains Fiore, ‘where you are not afraid to question, you’re not afraid to push back and you know you won’t be persecuted if you bring up problems.’

Understanding what happens when team science goes wrong has not been as easy as Fiore hoped. ‘We don’t have good data to speak about that,’ he says, and funding agencies have been reluctant to study failures. But a common theme is the lack of a shared vision or goal. Read says he has seen multinational multi-lab projects go wrong in the past, where some of the labs simply didn’t deliver, perhaps due to changes in personnel or a lack of resources. ‘All of these [problems] are resolvable, if people are upfront,’ he says. ‘What you don’t want to do is to is to carry on merrily thinking everything is fine, and then suddenly, someone gives you a shock.’

In their team science field guide, the US National Institutes of Health suggests that a team sits down before a project starts and decides who’s going to do what and how the project will work. The outcomes of this discussion should then be used to write a team charter or agreement. ‘[The guide authors ] jokingly referred to it as the prenuptial agreement for science teams,’ says Fiore, but ‘research suggests that it’s an effective way to help manage teams.’

Wilkinson and colleagues at Georgia Tech have been trying to develop team science skills in their graduate students. ‘We try to give [students] a sense as to not only the benefits, but the problems that they might encounter,’ he explains. ‘Teamwork is not a part of the undergraduate training of chemistry students, so they are starting from a pretty low level in terms of formal training. [But] some of them are good at it anyway, because it’s just who they are.’ Although engineers traditionally do more group work, Read says they aren’t necessarily better at it than chemists or other scientists. ‘It all depends on the individual … it’s about working with people [and] having an open mind,’ he says.

Fiore agrees there is a need for formal training in team working skills: ‘Even though [some] students are getting experience in group work in their courses, they never really receive formal training on how to work in a team and more importantly, they never receive feedback about working in a team.’ He argues that most group projects are judged on the outcomes; ‘rarely, if ever, is it based upon how well you work as a team.’

An area that the Georgia Tech training has focused on is resolving the conflicts that are inevitable in teams. ‘You have to have a mechanism for working your way through conflicts that is productive rather than destructive,’ says Wilkinson. Students are taught to look for win-win resolutions, but also to know when to compromise and move on to achieve a larger goal. Most importantly, Wilkinson adds, students learn ‘how to start a conversation with someone about a problem in a way that actually might lead to a useful solution.’

Understanding how different personalities can work together is another important skill. ‘Team members really need to understand the kind of emotional needs and operating mindset of the other team members,’ says Wilkinson. According to Schumann, these differences help make a team successful. He describes the GlycoTrackers team as ‘a very colourful mixture of different people with different expertise from different walks of life who brought their own mindsets … eventually, that’s what also makes a difference.’

There are some commonalities to all team work, but Fiore says some unique features of science teams are starting to emerge in the work he and others are doing. One of these is the leadership structure of science. While academic institutions have department heads and faculty chairs, huge power is often also available to what Fiore describes as ‘rock star scientists’, who bring in large grants and prestige, and may operate outside the traditional hierarchies. Fiore suspects that in some circumstances, this is likely to have an impact on how science teams function.

But while funders and institutions are now keen to encourage team science, they do so in a system that was not always designed for it. ‘You are incentivised to promote your own independent line of research,’ says Fiore. ‘The fact that you need to have a principal investigator (PI) creates a problem in that it produces tension [in deciding] who’s going to be the PI, and it’s not beneficial to a collaborative mindset.’

This can also be a problem when it comes to authorship of publications, where it is still assumed that first or last authorships provide much greater value for scientists in terms of the credit they will receive when they come to apply for a new job or a promotion. ‘The institution I work for has a pretty good approach to valuing collaborative activity in general,’ says Wilkinson, but he also knows from interviewing younger academics, that they often worry that this isn’t the case. ‘They [still] believe that there are places where that collaborative effort would not be valued.’ Fiore has hopes that this might be changing with the development of systems such as the CRediT (Contributor Roles Taxonomy) classification, used by some journals to allow for detailed information about individual contributions to collaborative work.

In recent years, Smith says, the EPSRC has recognised ‘that research projects are increasingly conducted by teams of people, rather than individuals,’ and has begun to experiment with new approaches to supporting team science, including broadening the ways it recognises the different contributions and responsibilities people have in the delivery of projects. One change has been introducing co-PI roles in several programmes that support interdisciplinary or industry-focused collaborations.

Another sign of a change has been the Royal Society of Chemistry’s introduction of a number of team awards, including the Chemistry Biology Interface Division Horizon Prize. This year the prize was awarded to the GlycoTrackers team of around 50 researchers, including Schumann. ‘I think it’s appropriate that we get away from recognising only one person and go towards recognising the team,’ he says. He sees this as another sign of a change in culture that is now apparent in most chemistry departments: ‘There aren’t many labs that only pursue their own research and are successful doing it without working with others.’