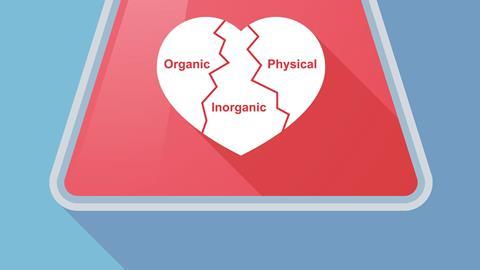 Chemistry has long been divided into three (or more) areas – but are they still fit for purpose?

A trip to Mexico is likely to leave many chemists in a spin. Recycling bins in its capital Mexico City are labelled ‘organic’ and ‘inorganic’: so where are you supposed to discard a plastic bottle? Jokes aside, many chemists will strongly identify with one of the science’s main subdisciplines: organic, inorganic and physical chemistry. But such divisions may not be fit for purpose in today’s interdisciplinary climate.

German chemists Horst Kunz and Klaus Müllen have suggested that these traditional divides are even getting wider. In their 2013 commentary in the Journal of the American Chemical Society, the pair, respectively from Johannes Gutenberg University and the Max-Planck Institute for Polymer Science in Mainz, suggested that increasing complexity has led to extensive focus on individual subdisciplines, which has limited cross-talk between fields.[1] They argued their own areas – natural product and materials chemistry – have experienced this trend, leading to an ever growing separation and they called for a new atmosphere ‘which ranks general scholarliness in chemistry higher than perfection in narrow, specialised corners.’ 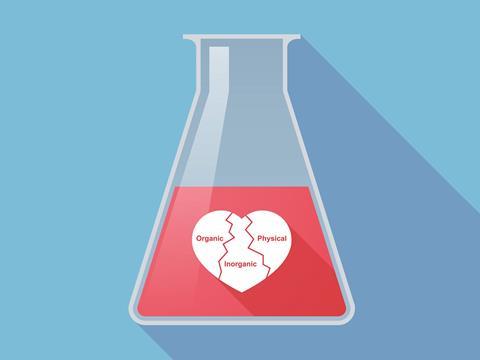 The pair state that modern chemistry contrasts with the labs of the past. For example, in the late 19th century chemist Emil Fischer’s lab in Berlin included scientists working in organic synthesis, biochemistry, nuclear chemistry and microanalysis – and produced seven Nobel-prize winners. Kunz and Müllen attribute the modern climate to the push for commericalisation of research, which has encouraged more isolation of subdisciplines.

‘I am not arguing against the classical disciplines, but that they should open up to a new concept of interactivity,’ says Müllen, pointing out that many advances have been made this way. For example, organic electronics required synthesising new polymers needed complex methods, developed by organic chemists, such as transition metal-catalysed carbon–carbon bond formation. In turn, polymer chemists optimised these syntheses, leading to advances in metathesis catalysis and breakthroughs in organic synthesis that now play a major role in natural product chemistry.

Of course, today many areas of research don’t neatly fit into the traditional subdisciplines. ‘Hybrid materials in batteries would suggest a more unified view of chemistry,’ Müllen observes. ‘So there are ample examples where you cannot define yourself as inorganic or organic chemistry.’

Some chemistry departments are trying to reflect this in the way they organise themselves. In 2012, when Lancaster University, UK, reopened its chemistry department (see Chemistry World, October 2016, p68) they decided to try a non-traditional structure, including a combined organic and inorganic synthetic group. ‘I like to say that our synthetic group makes molecules, our computations and theoretical chemistry group models molecules, and our analytical and physical people measure molecules,’ explains Peter Fielden, head of chemistry. The department now also has a biological chemistry group.

Yet while Müllen says the structural strait-jackets departments wear are strongly linked to the classical teaching syllabus, he defends the status quo of sub-disciplinary teaching, ‘I would not see a problem in basic chemical education being hardcore organic chemistry, inorganic chemistry, and physical chemistry … I am not in favour of mixing everything at the very early stage.’

Others do not agree. Simon Lancaster, professor of chemistry education at the University of East Anglia, UK, believes our teaching needs to start prioritising a more holistic understanding. ‘If you take the degree programme not as a series of pieces of content but of a series of concepts, then you will find that those concepts cut across traditional disciplines,’ he explains.

Teaching subdisciplines discretely, Lancaster suggests, sometimes loses the themes that unite the subject as a whole. For example, topics such as kinetics, orbital hybridisation, NMR spectroscopy and redox chemistry are often taught from different perspectives. ‘You get students learning essentially the same concepts three different times and frequently becoming confused in the process … some of them don’t even try to make the connection.’

‘One of the things we ought to be doing much better as a discipline is saying actually there is material you are going to look at through an organic lens, an inorganic lens and a physical lens, but actually it’s the same thing,’ Lancaster adds. ‘If we can get that message across then we can join up our chemistry degrees and make them a lot less compartmentalised.’

But changing the way degrees are taught and departments are divided is not so easy. ‘It’s often driven by the pragmatic need to divide the degree up in some fashion,’ says Lancaster. ‘You tend to fall back on the patterns you have adopted in the past.’

Some universities have made efforts to break down the traditional barriers. The University of Sheffield, UK, gives first year students one tutor for all modules. The aim is to create a more cohesive teaching experience and strengthen the relationship between tutor and tutee. ‘We took the view that any academic should be able to tutor level one chemistry, and fortunately most colleagues agreed, says Mark Winter, Sheffield’s director of learning and teaching. ‘It did mean that I and others needed to review some material in order to tackle the tutorials, but that is no bad thing.’

The new chemistry department opening at Swansea University in late 2017 is taking an even more radical approach – by getting rid of the traditional subdisciplines altogether. ‘Being able to start off from scratch here just gives us the opportunity to look around and say what has worked at other places, what do we want to put in our curriculum and in our teaching strategies’ says Simon Bott, who recently returned from the US to take on the ‘once in a lifetime’ task of setting up Swansea’s new degree.

Swansea’s curriculum will be based around the concepts at the heart of chemistry, with no formal split between inorganic, organic, physical or analytical chemistry. The first year will be divided into modules covering structure and bonding, alongside modules on reactions and reactivity. Further along, the degree will introduce a third theme covering characterisation and properties. Bott explains that each of the modules will be a mixture of the traditional sub-disicplines: ‘Structure and bonding [for example] will have some inorganic – the fundamentals of atoms and electron configuration, electron configuration and orbitals starts moving to the old physical parts – and it will have organic and as you move into molecules.’ In the final year, Swansea adds ‘capstone’ classes such as supramolecular or materials chemistry that require more explicitly interdisciplinary approaches.

However, there is a caveat to Swansea’s approach. Although not prescriptive about how content is presented, a chemistry degree must be able to show balanced content across the subdisciplines to receive Royal Society of Chemistry (RSC) accreditation – an important bench-mark for student recruitment. ‘We need to, of course, make sure that one can still recognise what would have been inorganic, what would have been organic and so on,’ Bott acknowledges.

But if teaching and research both benefiting from a more connected approach, why are subdisciplines still such a strong presence in most chemistry departments? Their enduring presence could be down to the strong social identity that the groupings provide – and the stereotypical views that chemists often have for their colleagues.

Joachim Schummer, philosopher and historian of chemistry at Karlsruhe Institute of Technology, Germany, agrees that the social factors play an important role in forming a chemist’s identity. ‘I think the long-lasting melting of subject matters have not adequately been mirrored in the social and organisational structure of the science, which is still very strong,’ he says. Schummer blames the lack of progression firmly at the feet of the funders, though he concedes the broad interdisciplinary nature of much chemical research ‘ignores both divides’.

While individual chemists may still have strong subdisciplinary identities, the trick seems to be to not let this get in the way of innovative research and teaching. As Bott observes, subdisciplines are just artificial constructs: ‘in actual chemistry [they] really don’t exist.’