What's law got to do with it?

Sean Seymore’s career has taken him from the lab to law school and back again. Yfke Hager determines his motive

It all started with a letter to the White House. Sean Seymore, then nine years old, thought he had created a new chemical using his chemistry set and had decided to ask the president to grant a patent. Unfortunately for Seymore, the Patent and Trademark Office replied to say that it wasn’t a new chemical entity, and was therefore unpatentable.

Following that rather inauspicious (though precocious) start, Seymore has since had much greater success with chemistry and the law. As an associate professor of law at Vanderbilt University, US, his research focuses on how patent law should evolve in response to scientific advances. And since 2011, a secondary appointment as associate professor of chemistry has enabled him to keep in touch with his scientific roots while providing the chemistry department and its students with his valuable expertise.

Life in the lab 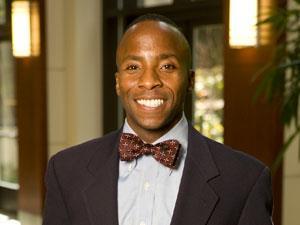 Seymore started out studying for a chemistry degree as the University of Tennessee’s first African-American Honors student. He initially wanted to be a chemistry teacher, but a laboratory class in inorganic chemistry led to a change of heart. ‘It was taught by George Schweitzer, and it was a transformative moment in my career,’ recalls Seymore. ‘After that class, I decided to do a PhD in chemistry.’

In 1996, when Seymore started his PhD at the University of Notre Dame in Indiana, he wasn’t the only new arrival in the chemistry department. Seth Brown had just joined the faculty, having completed a postdoc at the California Institute of Technology. ‘After just a few minutes of speaking to him, I knew he was the one I wanted to work for,’ says Seymore. It turned out to be a wise decision. ‘It was a wonderful experience doing a PhD with him. As well as being a brilliant scientist and a great mentor, he was a very hands-on supervisor.’ He had to be: Seymore was his first PhD student, and the lab still needed to be constructed.

Under Brown’s tutelage, Seymore worked on metal-mediated atom transfer reactions, including efforts to reduce dinitrogen in ambient conditions. ‘We sought to devise a system where the six electrons needed to reduce the [N2] molecule would be apportioned unequally by two transition metals, leading to a heterolytic cleavage of the molecule,’ he says. But they found that complete cleavage and its reverse (nitrido coupling), were prevented by decomposition pathways. Thermodynamic barriers to harnessing dinitrogen are often discussed, Seymore says, but ‘our work revealed that kinetic factors are a major challenge in designing a catalytic cycle.’

I taught the law

With his sights now set on becoming a chemistry professor, Seymore took up chemistry teaching positions, first at the Rose-Hulman Institute of Technology and then at Rowan University. But using a patented method to make a compound in his PhD had reignited his childhood interest and he was tempted to apply his chemistry expertise outside the lab. He decided to take the plunge in 2002 and headed back to Notre Dame, to study for a graduate degree in law.

‘Having a science background is actually advantageous [in law], because an ability to think logically is crucial,’ notes Seymore. ‘But of course, I had to adapt in some ways. In chemistry there is usually a right answer, but in law things aren’t so black and white.’ During his law degree, Seymore did a summer placement at Foley Hoag LLP in Boston and, after obtaining his law degree, he joined as a full-time associate, a decision he attributes to the excellent mentorship he received and the firm’s impressive client list. But he maintained his love of teaching and after two years he returned to academia with positions at Northwestern University and Washington & Lee University, finally joining Vanderbilt University in 2010.

With his secondary appointment as associate professor of chemistry, Seymore has now come full circle. And although his boyhood dream remains unfulfilled – he doesn’t have a patent to his name – he says he has recently achieved another, more valuable ambition: obtaining a positive faculty vote for tenure and promotion to full professor of law.