The complex business of give and take 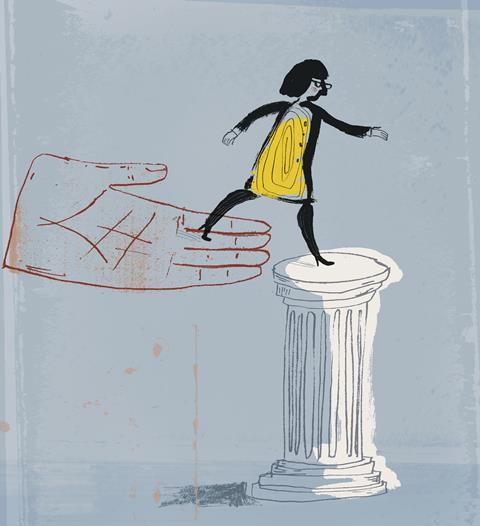 A 2015 study by researchers at Yale University confirmed what philosophers have known for a long time: being kind and helpful is good for your mind. In particular, if you assist other people, you protect yourself from the adverse impact of everyday stresses.

Benevolence is important in the scientific community too. Science thrives when scientists help each other out. Most researchers readily lend their reagents to other labs, consult each other on study design and lend a helping hand to junior faculty. And as Jennifer Heemstra, an associate professor of chemistry at Emory University, points out, helping each other is essential for solving the world’s biggest problems, such as infectious disease and climate change. ‘These complex problems require complex solutions that will only happen when people with diverse sets of knowledge, experiences and ideas collaborate,’ she says.

But the competitive nature of science means you might hesitate to help when a colleague asks for a favour. Maybe you’ve had a bad experience in the past. Maybe you were trying to help someone by bouncing around ideas – and they went ahead and set up a study using your suggestions and didn’t invite you to collaborate. Or perhaps they didn’t publicly acknowledge your voluntary contribution to their project.

Identifying trustworthy people who deserve your support and who you can reach out to when you need a helping hand is key to having rewarding experiences. Marie Mitchell, a professor of management at the University of Georgia, explains that there are three critical elements of trust: competence, integrity and benevolence. Competence is a measure of someone’s ability to excel at their work; integrity shows that a person behaves in accordance with ethical values; and benevolent colleagues keep in mind everyone’s interests, not just their own.

‘Each time you interact with a colleague, that gives you information about those three things,’ says Mitchell. ‘If you can gauge a person’s competence, integrity and level of self interest from the beginning, you can monitor that as your relationship builds.’

In people we trust

Teresa D’Oliveira, an organisational psychologist at King’s College London, says she is happy to be the first to share information and start the trust-building process, as long as there is no unfavourable information about the person in the whisper networks. But she doesn’t hesitate to probe someone to be doubly certain about their integrity. For example, many colleagues at conferences approach her with detailed questions about the study protocol described in her presentation. D’Oliveira invites such people for a chat later and finds out more about their study, the equipment they’re using, and their objectives. ‘This information can help me decide if this is a relationship that I can trust or not,’ she says.

Competitors are not your enemies

It would appear counterintuitive to team up with or ask for help from a direct competitor. But competitors are not your enemies and sometimes associating with them brings benefits. Teri Odom, a chemist and materials scientist at Northwestern University, recalls an incident where she reached out to a colleague to write a letter of recommendation for a grant application. He told her that he was happy to write her one, but he was also applying for the grant.

It was bit of a quandary for Odom, but she told her colleague to go ahead and write that letter. ‘I didn’t think that he was going to write me a negative letter to bolster his own chances because the community evaluates all the applications,’ she says. ‘Moreover, applicants often don’t know how the evaluators will weigh different criteria.’ She won that grant.

If you don’t feel you can help your competitors directly, there are still things you can do together that can benefit the wider community. ‘There’s a bigger circle we can be part of,’ says Paul Craig, head of the school of chemistry and materials science at Rochester Institute of Technology. ‘Perhaps we could work together to lobby a funding agency or an industry to support the kind of things we want to do.’

Despite the collaborative nature of science, feelings can sometimes get in the way of good intentions. The peer-reviewed grant funding process is competitive, and adverse political developments, such as the Trump government’s funding cuts and the uncertainty around Brexit, continue to create an unpredictable environment for researchers.

A hyper-competitive environment can sometimes make people very protective of their success, and they may feel helping others would jeopardise their own career advancement. ‘I think that is small and limited thinking, because the reality is it’s not a zero-sum game,’ says Odom. ‘We’re all welcome in the scientific community.’ Moreover, one person’s support alone does not determine an award or a promotion.

If I catch myself feeling jealous of someone’s accomplishment, I just shoot a congratulations note to the person

Mitchell says that it is helpful to understand your feelings and re-route them. ‘For people to be envious or jealous is a natural human tendency,’ she says. ‘If there is something about a colleague that elicits that kind of emotion in you, that means that there is an opportunity there for you to learn from the person. If you open your mind and your heart to that, then you can reduce that sense of competitiveness.’

Heemstra has devised an effective approach to engaging with such emotions. ‘If I catch myself feeling jealous of someone’s accomplishment, I just shoot a congratulations note to the person,’ she says. Then, she reminds herself, ‘this is not where I want to be as a person. I want to be someone who is really happy for the success of others.’ As a result, she says, ‘I actually do feel genuinely happy for them – it really brings me back around and reminds me how I want to be in this community.’

There are two ways to handle competition. ‘There is a healthy way that drives you to say “my science and proposals need to be top level,”’ says Heemstra. ‘The unhealthy approach, on the other hand, is to say “well, it’s competitive, so I’m just not going to help or collaborate with someone.” With the healthy approach, you’d say “it’s competitive, but I still want to help others.”’

However, if you have genuine concerns about the moral or ethical aspects of someone’s research, then it is appropriate to decline their request for aid. ‘Let’s say somebody was doing research that involves stem cells, and you had some moral concern about the use of stem cells in research,’ says Craig. ‘In that case, there may be a reason to draw back.’ Similarly, if you have qualms about someone’s funding coming from the military or a company making opioids, Craig suggests being upfront about the fact that supporting their research would morally compromise you.

Don’t make decisions that have career and ethical implications in isolation, but talk those through with people that you trust

Confused about whether to collaborate with someone or not? Or whether you should share your renegade ideas at the next meeting of the industry association? Craig emphasises the need to find mentors who can help you take complex decisions like these. ‘It’s really important to connect with mentors or people who have more experience about work relationships,’ he says. ‘Don’t make decisions that have career and ethical implications in isolation, but talk those through with people that you trust.’

Heemstra says that the only time she has declined to offer her assistance is when she is too busy. ‘I would really love to be able to help whoever reaches out to me, but I just can’t because I won’t be able to help the members of my lab with their research [as well],’ she says. In fact, a 2016 study published in the Journal of Applied Psychology shows that being too helpful can exhaust you. Researchers interviewed 68 professionals from various backgrounds for three weeks and found that if workers spent an inordinate amount of time assisting others, their own productivity plummeted – so prioritise your altruistic activities well.

What’s in it for you?

An appetite for solving others’ problems can pay dividends. ‘If you’re consistently helping people within a profession, organisation or a team, you get a reputation as someone who’s reliable, and that can ultimately help you in your career,’ says Kevin Cruz, an assistant professor of management at the University of Richmond.

Your helping nature will also expand your social capital. One of Craig’s goals is to publish papers with faculty who do not have tenure yet to help them attain tenure. ‘In the process, I gain these relationships with wonderful, gifted young scientists,’ he says. ‘I get to be part of their story, I get to see them grow and develop and become who they’re supposed to be.’

By helping others, you can also help yourself, as Heemstra has found. ‘Every time I give someone advice on their grant proposal, my grant writing skills get a little bit better too,’ she says. Supporting your colleagues also furnishes opportunities for personal growth, says Odom. ‘By deliberately helping other people, you change your own person, you change your own heart.’