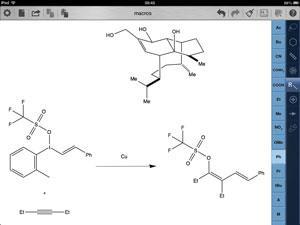 The desktop version of ChemDraw is generally considered to be the best chemical drawing software available, so its adaptation for tablets (iOS only at present) is an attractive prospect.

The result is a streamlined and smooth version of the full program’s interface, disproving initial fears that the tablet format would be too fiddly to draw structures quickly. Experienced users may pine for the desktop version’s myriad keyboard shortcuts, but many of the common functions (flip, rotate, join, move forwards and backwards, and the occasionally treacherous structure clean-up) are accessible in the toolbar, alongside the usual collection of rings and bonds. Atom labels have their own section of the toolbar, with a periodic table view for those moments when only an actinide will do.

However, moving beyond simple structures reveals the app’s limitations. Minor gripes such as not being able to toggle fixed bond lengths and angles are easily forgiven in a simplified (and cheap) version of a sophisticated program, but the real sticking point is the lack of a text box tool. This means there is no way to number or name compounds, or to include reaction conditions in a scheme. Worse still, as the text tool is also used to edit atom labels, its omission means that you are limited to elements and the small selection of functional groups in the toolbar. Better get used to drawing Fmoc groups in full.

Of course, the app costs a tiny fraction of what you (or your institution or company) would pay for the desktop version, so it’s inevitable that functionality will be limited. The app may well find use in educational settings (you can export files to the free Chem3D app), or for a bit of light structure editing on the go, but leaving out such a fundamental feature drastically curtails its worth for serious users. Perhaps the future will see a ‘full-fat’ tablet version included in the cost of the main ChemDraw package.

The update to ChemDraw for iPad adds a handful of new features: brackets, electron orbitals, a selection of the desktop version’s pre-drawn structure templates and, in response to popular demand, the text tool.

Being able to add brackets is handy and will no doubt appeal to those who like their polymers. The orbital menu may not be used all that frequently to draw actual orbitals, but it’s great if you need a cartoon representation of a solid-supported reagent, or if you just want to pimp your schemes with coloured blobs. The templates are a very welcome addition, as almost by definition they contain structures that you’d rather not have to draw yourself. Two of the more heavily used template sets from the main programme are available: common bridged bicyclic alkanes and various stereochemical conformers, including cyclohexane chairs and sugars.

The text tool, unfortunately, has only solved half of the problem. It’s now possible to add text captions – reagents in a scheme, for example – but atom labels still can’t be edited. Drawing protecting groups out in full may be a useful exercise, reminding yourself that they’re not chemically inert and do have steric bulk beyond that implied by neat abbreviations, but no one wants to do it all the time.

Without editable atom labels, it will almost always be necessary to head back to the desktop programme to put the finishing touches on an image. This remains a frustrating limitation of an otherwise excellent app.