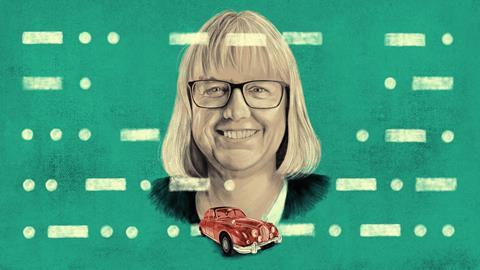 In situ with Donna Strickland

The Nobel prize-winning physicist on the joys of doing nothing, meeting the Pope and how her PhD completed her life’s goals

My career goal was to get a PhD. I didn’t actually have plans after that. That was really where my life’s goal ended. So it is kind of funny that I won the Nobel prize for it.

I like to do nothing. My sister and I have cottages 14 apart on Lake Huron and depending on which way the wind blows, I float down on my floaty chair and anchor with her or I float home after I’ve anchored with her. We just sit out there and chit chat.

It’s up to you to be happy where you are, not always wishing you were somewhere else

My husband and I have started rewatching the British mysteries because they put Inspector Morse back on TV during Covid. Even though it’s about murder, somehow it’s just comforting. British mysteries are not all about the gore, they’re really about good people trying to do good things.

I eat toast almost every day for breakfast. My husband always kids me about it because I otherwise don’t like having the same kind of food too often, but I need my toast to start me on my day.

I’m not a real good people person, so I don’t like to have a very big group. We have weekly group meetings, but I find those stilted. I’m also a hands-on person. Usually, if there’s a problem, I need to see it to really feel what the problem is. That’s why I like to be in the lab, just talking to my group members and having a conversation about where we’re going, how we’re going to get there and what needs to be done to get there.

I haven’t run an experiment in the lab since before winning the Nobel prize. Isn’t that sad? And then we got a new laser as part of a collaboration. It’s the first time in the 20-some years that I’ve been at Waterloo that I didn’t help to build the laser system. Now I’m trying to help my grad students online and I’ve not actually tweaked the laser myself and I’m left going ‘Oh, okay, I can’t really help out,’ which is a very weird feeling for me.

My Nobel prize-winning work is not in a high impact journal. And yet, people still found it, because I talked about it. I think we’re really falling down the rabbit hole of looking at h-indexes and citation counts. In my day of grad school it was hard to look up your citation index, you had to go to a library to find this big book. We also didn’t cite so many people. Now it’s become this game where you have to have extra pages on your paper just for all the citations so that we can all get big citation counts, and I think that’s somewhat missing the point.

Research culture is the freedom to ask why. But we’re told that you’re not going to get citations if you’re not working on a hot topic. If everybody is brought to these few hot topics, then we are probably missing out on some things that really should be looked at, because no silo can find everything. We need people working across the board. I would like to see people given the chance to play with whatever they would like to play with.

The best advice I’ve received is advice that my mother gave me. Her next-door neighbour gave it to her, and she thought it was so good. She said: ‘It’s up to you to be happy where you are, not always wishing you were somewhere else.’ That stuck with me – everywhere I’ve gone, I’ve got to find the good thing and then be happy there.

I got to meet the Pope. My PhD supervisor Gérard Mourou has hutzpah. He met someone who had met the Pope because they had done something very altruistic. Gérard just asked that guy: ‘Can’t you get me in to see the Pope?’ And that guy worked on it for six months. And then Gérard said: ‘Since you can get me in can’t you get Donna in too?’ because we were both in Rome for a National Geographic thing. And this guy got us in. Now I’ve been put on the Pontifical Academy of Sciences. Your life gets really wild when you win a Nobel prize.

Donna Strickland is a professor in the department of physics and astronomy at the University of Waterloo, Canada. She received the Nobel prize in physics in 2018 for her work on chirped pulse amplification, which she performed as part of her PhD.