In situ with James Clark 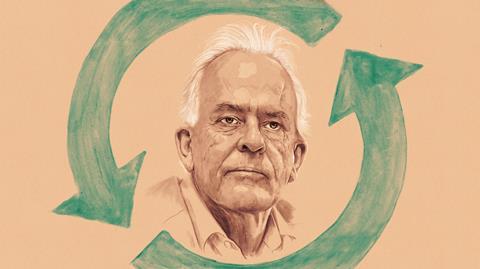 James Clark is the director of the Green Chemistry Centre of Excellence at the University of York. He has been instrumental in shaping the field of green chemistry across academic, industrial and educational settings, and was the founding scientific editor of the RSC journal Green Chemistry.

My involvement in green chemistry goes way back, long before it was even called green chemistry. In the late 1980s I got collaborating with a company that was quite new. It was pretty obvious that the stuff they were doing in real scale was rather nasty actually, in terms of it was very wasteful, using lots of hazardous reagents. We started playing around in the lab, just looking at ways to try and reduce the environmental impact of their big processes. That was just beginning to get momentum when the US EPA [Environmental Protection Agency], Paul Anastas and John Warner and so on came up with the terminology green chemistry. We thought great, this is what we’re doing. It gave us a bit of momentum to do more and more.

In the early days funding was difficult to get. In fact, in some of our early funding applications we had to use the word clean instead of green because green was considered to be politically a bit risky. Many of the larger traditional companies didn’t quite know what green meant and saw it as a threat to them, and academia was also very conservative and reluctant to do anything different. Chemistry had been ticking along quite happily without a lot of massive change and I think we threatened that.

I learned pretty quickly that me going around to a company, knocking on the door and saying, ‘hey guys, you should change your process’, wasn’t a very good way to do things. Legislation like Reach has really had a big impact because it’s basically saying there are many chemicals that you just can’t use anymore. And the fact that customers have become much more aware about green issues has worked its way back up the supply chain.

There are certain topics that have been very good at triggering enthusiasm. Everyone understands that waste is an issue. And I think one of the best things about green chemistry is that it gives you the tools that allow you to make something of that waste and really get some value from it.

I hate waste in any sense, also in terms of wasted talent. I want to do what I can to try and maximise the talent pool that’s out there in the world. And hopefully direct more and more of that talent towards what I like to do.

That’s the real opportunity, to not just go green but go better

I love team effort. I love collaboration, I love networking. I love meetings that have everyone from someone from the retail trade through pharmaceutical manufacturing into high profile academics, into government scientists. I love to have a big range of people there to really feel as though you’ve got a chance to make something happen by getting so many different pieces in the jigsaw.

Green chemistry is now being fed by lots of innovative small companies who are prepared to go out on a limb and do something different and threaten the status quo. I’d like to see more of the big companies get involved in the act as well to make the overall efforts stronger.

It’s very naive to assume that just because something has worked in a certain process for a number of years, therefore that’s the end of the story. The chances of that particular chemical being the best for that process is very, very small. It just happens to be one that works.

There needs to be more encouragement to get alternatives in place. At the moment if you want to replace a certain chemical you might struggle to find something that’s genuinely effective – cost effective, but also greener. The research base hasn’t been producing enough solutions to meet the demand that’s building up now. And I think the demand could be enhanced if there were more solutions available.

I’m very keen on biobased chemicals. There are some genuinely different molecules coming out of biobased chemical industry. And because they’re different, it means that you have to look at things a bit more imaginatively. I think the people that make all the effort to try and turn them into identical molecules to those we’re using in petroleum chemistry are kind of missing the trick. It’s a question of saying actually, it’s got different properties, it may be even better than what you’re using at the moment. That’s the real opportunity, to not just go green, but go better.

There’s no end to the challenge. It’s not green, it’s greener. It’s identifying the right path heading in the right direction, and then trying to get as many people on that path with you to really make a difference.