What are chemistry sets for? An idealistic answer might be that they ignite in children a passion for science in general, and for chemistry in particular. But the truth is doubtless more complicated. If you give your child a set, does that say more about your own aspirations as a parent than about the child’s real interests and desires? Are you hoping to compensate for what you fear is an inadequate science education at school? And how many sets sit unused on the top shelf after the first rush of excitement?

One of the attractions of the new chemistry set launched in October by MEL Science, a new venture conceived by software engineer Vassili Philippov, is that it seems to have been conceived with these questions in mind.

Philippov decided to create a chemistry set that would help children (and their parents) understand ‘why things behaved the way they did and not another way – a chemistry set for the 21st century, where real chemicals mix with virtual reality to explain things on a molecular level.’

MEL Chemistry is not exactly a ‘set’ at all – you don’t get a box with the familiar array of test-tubes containing coloured crystals. Rather, this is a subscription service, for which you are mailed three different kits every month. Each contains all you need for two or three distinct experiments on a given theme: ‘colourful chemistry’, say, or making a battery. The ingredients are neatly packaged in plastic bottles, and all peripherals are included: petri dish, battery holder and crocodile clips, filter paper, protective latex gloves. You will also need to buy the starter kit, containing a burner stand, flasks, safety goggles, introductory booklet and so on.

This is a smart model. It seems far more likely that a child’s interest will be sustained by a monthly arrival of entirely new kits, than by a single big box full of a bewildering array of chemicals. Right now there are six kits available, and those promised for 2016 look rather mouth-watering: chemistry in space, chemistry for detectives and photography. And there is some real science involved – not just the ‘bicarb and vinegar’ school of home chemistry, but things one rarely sees in such sets today. With the ‘Tin’ kit you can grow dramatic tin needle crystals on zinc, and marvelous electrodeposited tin dendrites. One of the canniest ideas is the inclusion of a macro lens for mobile-phone cameras in the starter pack, so that you can watch these processes close up and take striking images.

This facility, along with an online system for testing and ranking children’s learning, is designed to foster and sustain engagement and create a sense of a shared community. The MEL Science website explains the science behind the experiments, including further interesting facts and context (we learn about the tin phase transition that might have undermined Scott of the Antarctic’s tinned food supplies, for example, albeit perhaps a little too definitively). The MEL app shows all the relevant molecules in various graphical representations, viewable using the VR goggles provided.

It’s great to find reagents rarely seen in conventional chemistry sets today, such as potassium permanganate and iodine. This does mean that MEL Chemistry’s claim that the kits contain ‘no harmful substances whatsoever’ rather depends on what you do with them; likewise, their ‘really cool experiments that are absolutely safe’ include combustion processes fueled by hexamethylene tetramine. But that’s just a good sign that the set takes chemistry seriously. Adult supervision is always recommended, and the experiments are intended for children over 12, although that’s probably an over-cautious age limit. Lacking a convenient 12-year-old, I commandeered my 10-year-old daughter to try things out. She seemed to get the gist, and declared the ’sugar snake’ ‘the coolest experiment ever’. 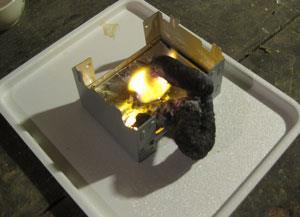 MEL Chemistry isn’t cheap – £29.95 for the starter kit, and £9.95 for each of the thrice-monthly kits. But it’s quality at a fair price.  Will the children learn from it? Let’s be honest, I’m not the most representative user to answer that. The website explanations are adequate – they would benefit from the attention of a really good editor, but I understand that’s in progress. Rather more is needed to transmit a deep understanding of the atomic-scale processes or the concepts involved, however. The app is pretty, but I’d suggest augmenting it with physical molecular models, diagrams and animations.

Yet it’s too much to expect chemistry sets to be a complete course in chemistry. This is one of the most exciting and ambitious home-chemistry educational projects I’ve seen, and I suspect it will be a better, more enduring investment than anything you’re likely to find in a brightly coloured box on the shop shelves.