Molecules: the elements and the architecture of everything 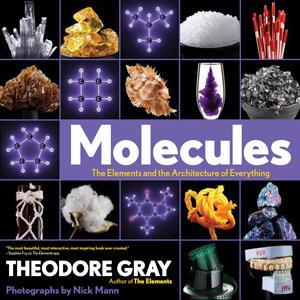 What I first thought to be a typical coffee table book containing nice pictures with little text turned out to be a lot more: supported by Nick Mann’s beautiful photographs, Molecules is a serious attempt to explain the world of chemical compounds to the reader without assuming previous science knowledge.

The first three chapters familiarise the reader with the notions of atoms, elements and chemical structures. The sections ‘compounds’ and ‘molecules’ give simple but meaningful introductions to ionic and covalent bonds, even though the section titles might be more confusing than helpful. The other 11 chapters focus on a variety of compound classes that have a strong connection to everyday life, such as oils, painkillers, sweeteners and dyes.

Molecules also contains parts that I wouldn’t have expected but was pleased to find in this highly visual book: one chapter on the distinction and similarities of ‘natural’ and ‘artificial’ compounds and another one on the mis- or underrepresentation of chemicals in media and politics. Despite sounding a little grumpy in the latter – a feeling many chemists may be able to relate to – Theodore Gray explains the problem with genuine concern using examples such as thimerosal and asbestos.

Throughout, Gray weaves historic, scientific and other facts into compelling little pieces of text, giving them a personal touch by often explaining how he obtained the sample shown. I particularly enjoyed Gray’s humour, for example, when he reminds us that baby oil is indeed a perfumed mineral oil and not actually made from babies.

Some of the descriptions are a little on the short side; for example, some readers would possibly appreciate a more detailed introduction to orbitals to better understand their shapes and names shown in the image. Moreover, I’m not sure if a whole chapter on the distinction of ‘organic’ and ‘inorganic’ compounds was necessary, other than for the reason to have a take on the terms ‘chemical-free’ and ‘organic’. However, Gray forgets to mention that ‘organic’ is also an official descriptor for sustainably produced agricultural products.

The striking photographs of items, powders and various samples of the compounds discussed are particularly vivid on the book’s black background. They go wonderfully alongside the chemical structures, which Gray chose to depict with a diffuse glow around the atoms: a reminder that molecules aren’t little balls connected by sticks but rather an assembly of nuclei surrounded by fuzzy electron clouds.

At only £20 the book makes a fantastic present for a science novice as well as for a well-versed chemist.

Purchase Molecules: the elements and the architecture of everything from Amazon.co.uk