My life in the golden age of chemistry: more fun than fun 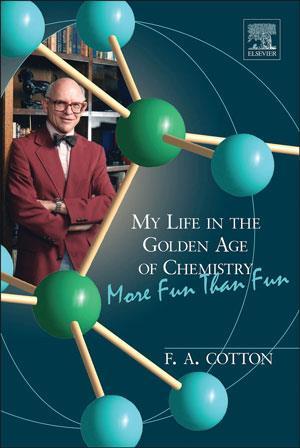 Frank Albert Cotton, known to most as Al, was one of the most outstanding inorganic chemists of recent times. He is remembered mainly for his remarkable studies on metal–metal multiple bonds, and a good account of these is woven into his book, My life in the golden age of chemistry. But he did memorable work too on organometallic, coordination and fluxional chemistry.

He was born in Philadelphia, US, in 1930 and died after sustaining an injury on his ranch in Texas in 2006, but had finished his manuscript before this dreadful event. His story is told chronologically with a 126-page bibliography of his 1620 publications from 1950–2008. There is also a nice introduction by the late Jack Lewis.

Cotton says that he cried lustily at birth and ‘hasn’t been notably quiet since’. His interest in science was kindled by a chemistry set and a home lab, and in 1947 he started a degree in chemical engineering. Cotton soon realised that chemistry was his true love and studied it from 1949 at Temple University, Philadelphia. In 1951 he went to Harvard as a teaching assistant, working with Geoffrey Wilkinson for his PhD, publishing some 20 papers with him. He moved to the Massachusetts Institute of Technology (MIT) in 1955 and was offered a professorship by Harvard in 1960 (had he accepted, he says he would have eventually won a Nobel prize), but stayed at MIT where he got a chair in 1961 – the youngest chemistry professor to receive the post up to that point. He took up riding and foxhunting in later years, spending 30 hours a week in the saddle on his Texas ranch.

At one point in the book he professes that ‘as most people will know … I am not excessively modest’, and a tedious account follows of medals, awards and honours – understandably these meant much to him but make for dull reading. Oddly, his 1994 appointment as a fellow of the Royal Society is given only half a sentence.

Throughout the text, he makes no secret of his views, mentioning that at MIT during the civil rights movement there were ‘leftist … roving anarchists pretending to be students … filthy nihilists’, but there are some nice, well-told anecdotes. There is a good section too on Advanced inorganic chemistry by Cotton and his collaborator Geoffery Wilkinson, a revolutionary textbook that had a profound worldwide influence on inorganic chemistry teaching. Although an ocean separated the two authors, and for early editions there was no internet to aid collaboration, the volumes flowed.

There are some slips, which he would surely have picked up had he survived – he’d have realised too that a subject index is sorely needed.

The book will be of particular interest to inorganic chemists and is a record of a remarkable and high-achieving scientist.

Purchase My life in the golden age of chemistry: more fun than fun from Amazon.co.uk