In situ with Rita Colwell 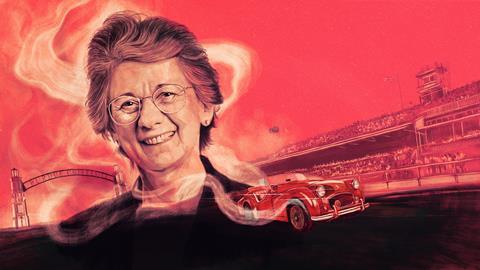 Rita Colwell is a distinguished university professor at the University of Maryland College Park and Johns Hopkins University School of Public Health. From 1998 to 2004, she served as director of the US National Science Foundation, and she is also the founder of the bioinformatics company CosmosID.

I grew up in Beverly Cove, Massachusetts, a little town about 30 miles north of Boston, on the coast. My father and mother were immigrants from Italy. My dad was a labourer, then a foreman, and founded his own construction company. He was very supportive of women receiving a good education. I always wanted to be a scientist. I went to Purdue University, turning down Radcliffe College – in those days, women couldn’t go to Harvard.

I met my husband when he was a physical chemistry graduate student at Purdue. We later attended the University of Washington in Seattle, where we obtained our PhDs. To celebrate graduating in 1961, we bought a bright red Triumph TR3, a British sports car. We drove it until our first child was born, when we traded it for a more sensible station wagon.

In my time, women were not welcome in the lab at all. Perseverance and mentors – male mentors, and occasionally some female mentors, when available – helped me immensely. At that time, there were not very many women full professors in the sciences. You could count them using both hands. There are now more female mentors, but what hasn’t changed is the number of female full professors – there are a lot of assistant and tenured associate professors, but not senior professors and department chairs.

The hardest thing has been to persevere when attacked for my scientific results. I have to think it has to do with my being a woman. Thankfully, the discoveries were fully reinforced by other investigators, which is the way science works. An ad hominem attack is not the path for science. A scientist will look at results, repeat the experiments, and if they can’t repeat then challenge. You don’t challenge first, simply out of prejudice, without a basis for the criticism.

I concentrate easily and intensely. In fact, my children tease me because when I am working I become so engrossed. Once, I was sitting on a couch by the fireplace in our house and a little ember flicked out, landing on a cushion behind me, and began to smoulder. I was busy editing and working on a manuscript. My daughter came downstairs and said, ‘Mom, the couch is on fire!’ So, I guess I can work anywhere.

I chaired the US National Academies committee that produced a major report a year ago on the sexual harassment of women in science. The timing was exquisitely good – it was published, providing results in a heavily documented study just at the height of the #MeToo movement. It was extraordinarily important that it happened as it did because it underpinned, with lots of data and lots of information, exactly what many of the complaints were about in the #MeToo movement.

There is now less reluctance to speak up and speak out. There is greater willingness to document harrassment, and to work on the implementation of lessons learned, as far as the system is concerned.

I served as director of the National Science Foundation during both the Clinton and Bush administrations. It was really an extremely good time, in retrospect. I was able to increase the agency’s budget by 63%, and established a lot of important scientific and engineering programmes. I was able to work with both sides of the congressional aisle. People talked to each other then. They may have had different ways of looking at social issues, but when it came to science they were supportive. Today, polarisation makes it more difficult to get significant increases for science.

Scientists are not perfect human beings, but we search for the best way of knowing. The attack on science is a significant threat. That is to say, the barrage of pseudoscience, the fabrication of science, as well as the lack of respect for the best scientific knowledge, is dangerous.

We have always had misinformation, such as phrenology – the theory that the shape of your head could predict your intelligence. But within the last decade, misinformation and pseudoscience seem to be appearing with a new intensity. It seems almost like a disease that is spreading, sort of like an intellectual coronavirus.