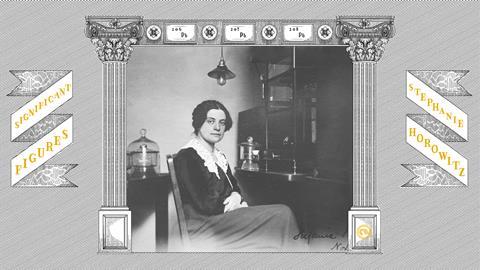 Stefanie Horovitz – the woman behind the isotope

Overlooked by history, murdered by the Nazis: the forgotten story of a talented chemist who helped prove the existence of isotopes

‘You probably have not received any information from Vienna about the fate of Dr Stephanie Horovitz. I learned about it from a mutual relative at Warszawa [Warsaw]. Stephanie moved there after World War I and after her parents had died in Vienna to join her married sister. She was not active in chemistry and both were liquidated by the Nazis in 1940.’
Taken from Marelene Rayner-Canham and Geoffrey Rayner-Canham, Stefanie Horovitz: A Crucial Role in the Discovery of Isotopes in Women in Their Element, World Scientific 2019, pp296–297

These chilling words were written by Polish-American chemist Kasimir Fajans to Elizabeth Rona, a Hungarian chemist also living in the US. Both Fajans and Rona were experts on isotopes and radiochemistry. But their careers, and that of many others, hinged on the painstaking work of the woman Fajans was writing about – a woman since left out of the history of chemistry – Stephanie Horovitz.

Horovitz’s murder at the Treblinka extermination camp in occupied Poland at the hands of the Nazis was the final tragic turn in the life of a meticulous and talented experimentalist, destined to be overlooked by history. Her careful extractions and measurements confirmed the existence of isotopes, a finding that had huge implications to chemists working in the early 20th century, and still resonates today.

Little information about Horovitz’s early life exists, according to historians of chemistry Geoff and Marelene Rayner-Canham from Memorial University in Canada. But as far as we do know, she was born in Warsaw in 1887, the daughter of the painter Leopold Horovitz, and she had a sister. The family moved to Vienna, where in 1907 Horovitz began her studies at the famous university there. In 1914 her research into the rearrangement of quinones with sulfuric acid earned her a doctorate in chemistry, under the supervision of Guido Goldschmiedt.

After, or perhaps even during her PhD work, Horovitz started working with Otto Hönigschmid, who was at the Radium Institute in Vienna. Hönigschmid had worked with Theodore Richards at Harvard University in the US – Richards had won the 1914 Nobel prize in chemistry for his work into determining atomic weights of elements, and was a formidable and careful experimental chemist. In the generational way that science works, Richards trained Hönigschmid, who then – presumably – trained Horovitz.

The work would have been very tedious

Hönigschmid was striving to unpick more evidence that elements could exist with different masses. The term isotope, introduced by Frederick Soddy (although first suggested by Soddy’s friend Margaret Todd, a pioneering doctor and novelist) was still new. Soddy, working at the University of Glasgow in the UK, would go on to win a Nobel prize for his identification of the existence of isotopes. His work was coincident with that of Fajans, and they both showed around the same time that as radioactive elements emit alpha particles, they decay and become elements with atomic number two places lower, whereas beta emission shifts them up by one atomic number.

But back in 1914, evidence was scant to back up these theories. According to Soddy’s suggestion, radioactive elements, like uranium, decayed to form lead. But the lead produced by this decay would have a different atomic mass to lead that wasn’t formed in this way. Hönigschmid gave Horovitz the painstaking task of testing whether Soddy’s suggestion was correct.

Hönigschmid and Horovitz were blessed with some lucky geography – the St Joachimstal mine was near to Vienna, which provided huge quantities of pitchblende (an ore of uranium that also contains radium and lead). Ores from this mine were used to prepare the US’s radium standard in 1913. After the radium from these ores was extracted and sent to other labs – including those of Marie Curie and Ernest Rutherford – Horovitz was left with what remained.

The work Horovitz had to do was two-fold. First the bulk separations from the ore, says Geoff Rayner-Canham, and then the very precise measurements to work out the atomic weights of the resulting lead. The work, according to Marelene, would have been ‘very tedious’. Horovitz was faced with the uranium ores in the form of huge lumps of rock. She had to dissolve the ores to extract the lead as a chloride. The meticulous work she then undertook to purify the lead chloride so that the atomic weight measurements could be made was heroic.

Here was the first direct evidence for the existence of isotopes

Reading a translation of the experimental procedure described in Hönigschmid and Horovitz’s 1914 paper is extraordinary. In brief: the lead chloride was washed, filtered, dissolved as sulfate, redissolved, filtered and washed some more, then dissolved into nitric acid to form a nitrate. This was recrystallized five times, then converted to a chloride in hydrochloric acid and then crystallised another five times, followed by a further nine recrystallisations to get a lead chloride worthy of atomic weight analysis.

She then performed gravimetric analysis and titration experiments to calculate the atomic weight of the lead in her pure lead chloride. Tedium aside, the levels of accuracy with which Horovitz measured the atomic weights were extraordinary. And what she found was a crucial result. The lead from the ores – the product of decayed uranium and radium – had an atomic weight of 206.736, compared to 207.190 for lead that wasn’t made by radioactive decay. Here was the first direct evidence for the existence of isotopes. Their paper has since been hailed as one of the most important chemistry publications in the first half of the 20th century.

Horovitz went on to make another important step in proving that isotopes were real, as well as proving that a recently discovered element – ionium – didn’t actually exist. In 1916 she published her results. Ionium had been announced in 1907, and accepted as another radioactive element. Between 1914 and 1916 Horovitz and Hönigschmid turned their attention to determining ionium’s precise atomic weight. What Horovitz found was that ionium’s spectroscopic and chemical properties were the same as thorium – but its atomic weight was different. She had shown that ionium didn’t exist, and at the same time provided more evidence for isotopes.

Horovitz’s contribution to chemistry has long been forgotten. But to wail and gnash teeth about this injustice would only open you up to a never-ending torrent of tears, because Horovitz was far from the first, or last, female or minority junior researcher to be overlooked. Indeed, historians of chemistry the Rayner-Canhams have encountered this lack of recognition for early-career female scientists in particular time and again. ‘Women could not get academic positions in those days. It was unthinkable that a woman could be a professor,’ explains Geoff. Often women who wanted to stretch their scientific muscles had to make do with being unpaid research assistants. And as a result assist numerous more powerful – and socially acceptable at the time – male professors to gain reputations and prizes.

Knowledge of her contribution slipped away

The Rayner-Canhams speculate that perhaps the reason Horovitz’s chemistry career seemingly ended so abruptly was because Hönigschmid moved to Munich. ‘She probably wasn’t allowed to go there,’ says Marelene. In the early 20th century there was a rigid divide between male academics: those who supported women in science and those who did not. And if an institution was hostile to women, they simply couldn’t go there. The Radium Institute in Vienna was a welcoming environment for female researchers. Perhaps Munich wasn’t.

It seems Hönigschmid, Horovitz’s supervisor, tried to maintain her status within the scientific community. Geoff Rayner-Canham says Hönigschmid always quoted Horovitz, and two of their key papers from 1914 list both scientists as authors. But because Hönigschmid was the bearer of the reputation and academic position, after his own untimely death other researchers simply dropped Horovitz’s name. And so knowledge of her contribution slipped away. Horovitz was ‘just another woman being written out’, says Geoff.

After parting company with Hönigshmid, Horovitz’s career took a sharp turn away from chemistry. She became increasingly interested in psychology and found work as an educational advisor. Along with Austrian psychologist Alice Friedmann, Horovitz established an educational residential children’s home in Vienna, to give children an opportunity to undergo their psychological therapy away from their home environment.

As far as can be worked out, says Marelene Rayner-Canham, Horovitz turned herself in to the authorities. Her biography from the University of Vienna says that in 1937 Horovitz emigrated to Warsaw with her sister. A Jewish ghetto was established in the city in 1940 and the sisters could have escaped at that point. According the University of Vienna’s account, though, they remained.

Her contribution was appreciated, and she was well known as an important figure

In 1942 the Nazis began deportations from the ghetto, under the guise of resettlement, but the horrific reality was genocide, and all transportations were headed to the extermination camps at Treblinka. The Horovitz sisters reported to the Nazis in 1942 in order to avoid putting other people in danger, again according to the University of Vienna. Who they were protecting, and why, is unknown.

The sisters were transported to Treblinka the same year and were among the estimated 900,000 Jews murdered there.

Hönigschmid took his own life in 1945, in Munich, shortly after his friend and colleague Hans Fischer did the same. Both were said to be in despair about the destruction of their works and research institute in the final moments of the second world war. An obituary published in Nature in 1946 gives great weight to Hönigschmid’s work with Nobel-prize-winning Richards. And the obituary mentions the work on atomic weight measurement: ‘His careful work on radium, thorium, uranium and ionium as well as on the radiogenic leads contributed in no small degree to the body of direct chemical evidence which supports Rutherford and Soddy’s theory of radioactive disintigration.’ But Horovitz’s name doesn’t appear at all among the mention of a number of his other collaborators and colleagues.

That letter between Fajans and Rona, detailing the fate of Horovitz, shows that within her immediate circle of colleagues and collaborators, she was appreciated and well known, says Geoff Rayner-Canham. That two prominent figures were discussing her and her fate years after her death shows that her contribution was appreciated, and she was well known as an important figure in the story. Perhaps that is some consolation, Stephanie Horovitz has been forgotten by history but to her contemporaries she was vital, respected and remembered.

Katharine Sanderson is a science writer based in Cornwall, UK