The aha! moment: a scientist’s take on creativity 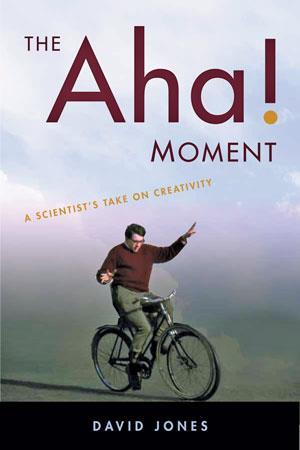 David Jones sees himself as the court jester of science and, as with jesters of old, he is allowed to say things that other mortals might think but dare not speak for fear of being thought a fool. So it was with his regular Daedalus column, which for years delighted readers of New Scientist and Nature with its crackpot ideas. Some of them even proved to be prophetic – witness his article in 1966 which suggested that carbon might form large hollow molecules. This was almost 20 years before the first buckyballs were made by Kroto et al.

While The aha! moment recounts many such suggestions, its main purpose is to explain Jones’s ideas of how the human mind can suddenly come up with new ideas and solutions to problems, the ‘aha!’ moment of the book’s title.

His model of the mind consists of the highest level, the conscious one, which he calls the ‘observer–reasoner’. Below this is the ‘censor’ whose job it is to control the thoughts that are generated at the deepest level, which he calls the RIG, short for random ideas generator. The main job of the censor is to ensure the thinking mind isn’t swamped with random thoughts and yet allow serious ideas to get through. Of course only a few of those will ever amount to anything, but some ‘aha!’ moments of scientists have been truly world-changing.

In this book Jones retells many of his zany ideas, including a few new ones, and recalls his problems with demonstrations for lectures and TV programmes. These were not just those involving explosions and rockets, as we might expect, but with truly difficult ones like how to twist treacle.

The aha! moment is not just a book of anecdotes and lifetime memories, it also sees Jones philosophising. Sometimes this in poetic mode – as with his account of how God created the universe, or at least the universal physical constants.

Most of the book is an eclectic blend of Jones the chemist and Daedalus the mad scientist and together they make entertaining reading. You’d be mad not to buy it.