The elements: an illustrated history of the periodic table 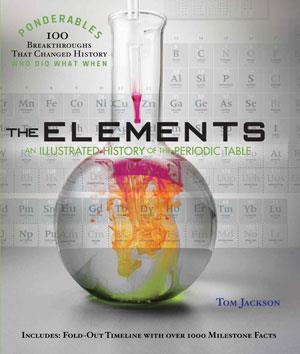 Tom Jackson is a prolific writer of popular science books aimed mainly at children. He’s written more than 80 of them, and now he’s turned his lively mind to making the history of the periodic table both informative and interesting.

This book is beautifully illustrated and consists of 100 accounts, in chronological order, of the discovery of the elements, and of atoms and their constituent parts. While these accounts are necessarily brief, they contain the essential data. And that is not all – at the end of the book are Jackson’s ‘imponderables’. These are short pieces on subjects such as ‘Will the periodic table run out?’ (he thinks we won’t get past element 137); ‘Did buckyballs bring life to Earth?’ (well, they can encapsulate all kinds of things); and ‘Can we build structures out of liquid water?’ (by structures,

he means hollow clusters of H2O held together by stabilised hydrogen bonds).

Jackson also has a section entitled The great chemists, although this includes individuals we don’t generally regard as chemists, such as Aristotle, Plato, Roger Bacon, and Hypatia of Alexandria – she lived from 355–415 AD and invented the hydrometer. Most of the list recounts the discoveries of the more established ‘great chemists’, such as Antoine Lavoisier, Henry Cavendish, Pierre and Marie Curie, and Linus Pauling.

The elements starts with a section on the periodic table, explaining how it came about, what it means, and how it can be used. Rather oddly it has Ti as the chemical formula for thallium, and this mistake occurs throughout, but thankfully not in the wonderful pull-out chart which comes with the book. This chart lists all the elements in order of atomic number with their basic properties, sources and uses, together with a timeline of historical events.

The body of the book recounts the key steps by which we climbed to the pinnacle of chemical knowledge on which we now stand. It starts with the stone age ‘chemists’ who discovered fire and ends with the Higgs boson, whose discovery sort of explains the existence of matter. Between them are some fascinating stories which he tells in his readable style.

All right, so Jackson isn’t a chemist, but he’s a bloody good writer and if you want to give a young person a gift then you could do no better than this book. It’s a gem.

Purchase The elements from Amazon.co.uk