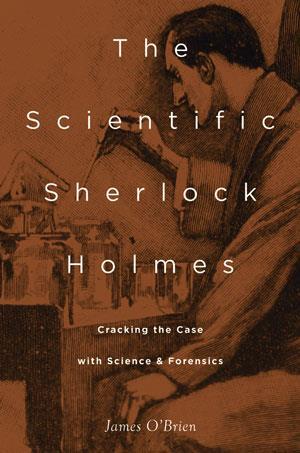 I was delighted to receive this book for review, having been a Sherlock Holmes enthusiast for about 30 years. The author says in his introduction ‘This book focuses on the scientific side of Sherlock Holmes’ and thus I set about the review expecting to find such a focus.

Unfortunately, I met with a degree of disappointment. The early chapters contain a good deal of biographical information on Arthur Conan Doyle and on the principal characters of the Holmes stories but the scientific content is very light indeed. The emphasis remains on Holmes’ deductive powers to the exclusion of the science.

Next, an analysis of Holmes’ forensic skills is advertised, but again the goods invoiced are not really delivered in the text. We are given a brief biography of Alphonse Bertillon (pioneer of anthropometry), followed by a discussion of fingerprints and footprints and mere accounts of Holmes’ use of these, with little if any original or analytical thinking. The matter of handwriting is similarly covered. All of this is accompanied by recent incidents and cases linked tenuously if at all with Holmes stories. By this stage the reader is also becoming aware of a general defect: too many reproductions of  illustrations from the original canon, which do no more for the text than increase the page length.

In the chapter Holmes the Chemist, we might hope for something solidly scientific. The early pages contain a mere reproduction of the list of Holmes’ ‘abilities’,  jotted down by Watson. There is a short review of articles on the matter of Holmes’ interest in coal tars, which contains very little about Holmes’ own involvement in coal tar research even though Julius Caeser, Queen Victoria and Empress Eugenie of France each feature.

In the section on ‘chemical poisons’, the reader is gratified to see some calculations apropos of poisonous gases, using the ideal gas laws. Later parts of the chapter contain some information on basic organic chemistry, to no real effect. The chapter concludes with what purports to be the author’s assessment of Holmes the chemist but this is little more than a rather unfocused assembly of quotes from the canon and of references to other writers on Holmes.

Holmes’ mathematical skills are evaluated in the next chapter with mention, for example, of Holmes’ estimate of a man’s height from his stride and of his calculation of the speed at which he was travelling by rail in the Silver blaze story. However, by this point the book’s deficiency in respect of its stated aim is apparent and a reader’s disappointment complete.