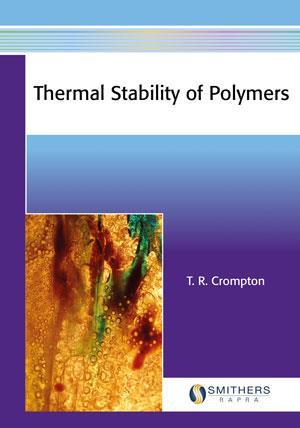 This book reviews the literature on the thermal stability of various polymers using a number of analytical techniques and hence provides a very good initial reference for scientists working with polymers. All the important polymers, namely carbon–hydrogen based, rubber, oxygen–, halogen–, nitrogen–, sulfur–, silicon–, phosphorus– and trace metal–containing, are covered in chapters one to nine respectively.

While the breadth of the subject is demonstrated by the compilation of major works in the area, the references are relatively old – the majority of them are up to 2000, with very few from 2001–2004 and none beyond that.

The majority of the chapters are well written, starting with the mechanism of decomposition of different polymer types, followed by the results from various analytical techniques presented in tables and figures. However sometimes, in particular in chapters one and two, analytical techniques are introduced without discussing their relevance to the thermal stability of polymers. This makes it difficult for non-experts to understand the significance of the results. In some cases, results from the literature are presented without providing details of the samples, or examples of polymers plus additives are presented without explaining the effect that additives can have on the thermal stability of pure polymers, which makes it difficult to follow.

Perhaps at the beginning a brief introduction to the various techniques and a discussion that compares their validity, relevance to the subject area, limitations and reproducibility would be beneficial, especially to those who are new to this area. It would have also been beneficial if the author had discussed methods to improve the thermal stability of polymers. On another note, in some equations, signs for free radicals and some bonds are missing.

To summarise, despite the shortcomings mentioned above, the book is a very valuable compilation of the literature on thermal stability of a wide range of polymers, which would be useful for polymer manufacturers and end users, as well as scientists working in this area.