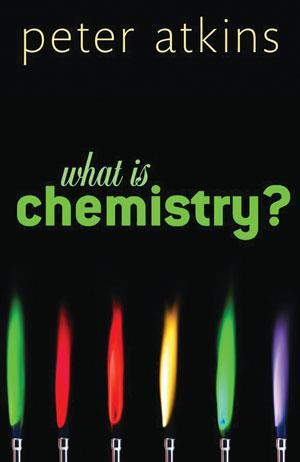 What is chemistry? is designed to tell the average person all about our science and in a way they can understand. There are chapters on atoms and molecules, energy and entropy, techniques and reactions, and they are all explained with a minimum of chemical terminology. And while there are a few chemical formulae, there are no molecular structures over which laymen might stumble and stop reading. Of course there is a periodic table in the book but that is something everyone recognises and, I hope, appreciates.

This isn’t a book for the readers of Chemistry World. It is for those of their friends and family who know almost no chemistry but would like a brief guide to what many may think is a mysterious island with an incomprehensible language. One where the inhabitants are involved in producing nasty ‘chemicals’ that are a threat to food, health and the environment. Such has been the attitude behind many alarmist newspaper stories of the past

Of course, chemistry has its dark side – witness chemical weapons and explosives for munitions – and Peter Atkins does not shrink from calling such things pure evil. However, that’s not the purpose of his short book. Its objective is to extol the benefits that chemists have brought to the world and in chapters 6 (Achievements) and 7 (The future) he does just that.

Thankfully, the youth of this century seem to have rejected the misleading attitudes regarding ‘chemicals’ that many of their parents adopted. The burden of reviving chemistry and its associated industries in the UK will fall on their shoulders and I would like to think this book would point them to a future in our science.

The book’s title hints at  philosophy and Atkins does indeed engage in a little of this as he justifies the position of chemistry in the great scheme of things. However, he doesn’t get deflected from his main aim, which is simply to explain what chemistry is all about, and it is written with the clarity for which Atkins is renowned.

Purchase What is chemistry? from Amazon.co.uk