Scientists in the US and Israel have captured a never-before-seen transition in an inorganic cluster – a change akin to isomerisation in organic compounds. Uri Banin from the Hebrew University of Jerusalem says that the CdS clusters represent a ‘final bridge’ between nanocrystals and molecules. ‘We now know that if you shrink an inorganic material small enough it can act like an organic molecule,’ adds Banin’s collaborator Richard Robinson from Cornell University. ‘The implications of that are enormous.’

In bulk crystalline materials, structure changes occur through phase transformations, which start with nucleation events and then propagate through the material. At the other end of the length scale, small molecule isomerisation happens in a single coherent step. The Cd37S20 clusters Banin and Robinson studied exist between these two extremes and have the properties of both. ‘Remarkably, [the cluster] transforms between two “isomers”, or “phases”, in a coherent manner, reversibly,’ Banin tells Chemistry World.

Isomerisation in small organic molecules and phase transitions in bulk inorganic solids are at opposite ends of the length scale and have different mechanisms. Inorganic clusters sit in-between, and have the properties of both types of change.

The discovery came when Robinson visited Banin in Jerusalem, and his doctoral student Curtis Williamson sent over a sample of their new clusters. In Israel, the scientists discovered that the clusters absorbed a different wavelength of ultraviolet light than expected. After confirming it really was the right sample, they realised the sample had changed in flight, which ‘unleashed a cascade of questions and experiments’, Robinson says.

Back at Cornell, Robinson and Tobias Hanrath’s teams made high-purity clusters that absorbed at 324nm, which they assigned as α-Cd37S20. After exposing a thin film of these clusters to methanol vapour, this peak diminished, and a different narrow absorption peak emerged at 313nm, which they assigned β-Cd37S20. Heating to purge methanol switched the structure back, with the scientists repeating the change several times, measuring the switching rate. 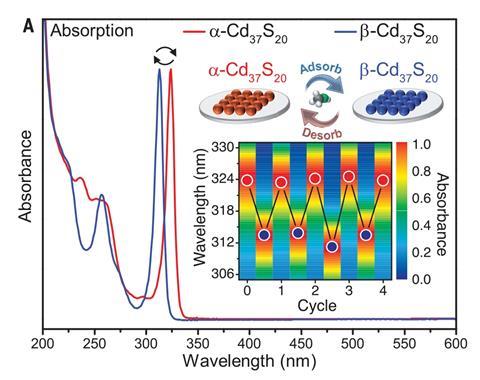 When α-Cd37S20 adsorbs methanol, it switches to β-Cd37S20, with a corresponding change in the adsorption spectrum. The switching is reversible upon alcohol adsorption and desorption (inset)

The researchers resolved the isomers’ crystal structures using x-ray total scattering, using advanced pair distribution function analysis to precisely determine the location of the atoms. They showed that the α-isomer had a ‘wurtzite-like’ structure and the β-isomer had a ‘zinc blende-like’ structure. Hanrath notes that although the clusters don’t exactly resemble bulk phases, this structural change is like a phase transition between hexagonal and cubic crystalline forms of CdS.

The scientists also showed that methanol triggered the isomerisation by shifting the arrangement of the carboxylate ligands at the surface. This, the first-order kinetics, and the lack of any intermediate states between the α and β forms, indicate the change occurs in a single, coherent, isomerisation-like step that Hanrath calls a ‘revelation’.

‘This is beautiful chemistry,’ says Brand Cossaert from the University of Washington. ‘This phenomenon is caught in between two well-understood worlds: solid–solid transformations and molecular isomerisations.’ Cossaert says the team provides ‘convincing evidence of a coherent structural isomerisation in an inorganic nanocluster’.

Robinson expects to find similar single-step transformations in other semiconductor and metal clusters as initiation at the surface could be relevant to other material systems. He warns that applications are hard to foresee, but says that they might be used as switches between two states and in sensing. Also, the transformation could help produce larger nanocrystals. ‘Directly time resolving such a transformation would be fascinating although quite challenging,’ Robinson adds. ‘We expect this to happen on a 100fs timescale.’