A chemical regulation comes of age

For the European chemical industry, 2010 was all about registration under the Reach regulation, the focus of our roundup 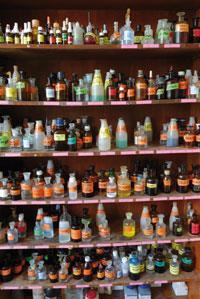 The 2010 deadline only applied to bulk or very hazardous chemicals

The man on the street may not have felt it, but last year there was a seismic shift in the way chemicals are regulated in Europe. The first registration deadline for arguably the most ambitious piece of chemical legislation - the registration, evaluation, authorisation and restriction of chemicals (Reach) regulation - came and went, and those close to the matter were in no doubt about the significance. ’Today was perhaps the most important date in this year’s calendar for the many thousands of companies supplying chemicals in the EU,’ declared the UK Chemical Industries Association on 1 December 2010.

The Reach regulation has many elements to it. But registration is perhaps the one that has generated the most discussion. In general, the regulation requires companies to submit registration dossiers for the chemicals they make or import. After the relevant deadline, companies are only allowed to carry on supplying their chemicals if they are covered by registration dossiers. The 2010 deadline applied to bulk chemicals, those supplied in quantities of over 1000 tonnes per year, and very hazardous chemicals. Deadlines in 2013 and 2018 will apply to chemicals supplied in smaller quantities.

In the run-up to the deadline, many expressed concern over how the European Chemicals Agency (ECHA), the administrative centre for the Reach regulation, would stand up to the deluge of dossiers. The agency was hampered by embarrassing technical difficulties in 2008 during the pre-registration process, in which companies had to signal to the ECHA their intention to register chemicals (see Chemistry World, July 2008, p8).

The ECHA website was then unavailable for several days in September this year due to damage to a broadband cable in Sweden. But in general the registration deadline seemed to pass without incident. Certainly, the industry view was positive. Jo Lloyd runs ReachReady, a consultancy that helps companies comply with Reach. She says that those companies she works with that had to register did make the deadline.

There is also evidence that the underlying legislation is functioning well. The chemical industry has always said that Reach places an unprecedented burden on companies. But the statistics from the first registration deadline suggest that the groups considered most poorly equipped to shoulder it faired better than expected. For example, medium, small and micro companies together represented 14 per cent of submissions. Another group that some thought would struggle were non-EU companies that - despite their main activities taking place elsewhere - have to comply due to the spread of their supply chains. But registrations from such companies, which came through separate legal entities, accounted for 19 per cent, evidence, Dancet says, that the process was accessible to all. Perhaps most tellingly, the option that in ’exceptional circumstances’ companies would be allowed to dodge certain aspects of registration was little used. Only 17 companies identified themselves as affected by relevant issues.

But was everything registered that needed to be registered? Earlier this year, downstream manufacturers in the UK voiced concern that they could suffer disproportionately if their suppliers failed to register the chemicals they used. They should be given a period of grace, they argued, because they might have to adjust to problems that someone else created for them. Reach advocates dismissed such concern as hyperbole. But the number of registrations did fall short of expectations. The ECHA received 25,000 registration dossiers covering 3400 ’phase-in’ substances - chemicals that were on the market before the regulation came into force. This represented 28 per cent fewer chemicals than the 4700 it had expected. Kevin Considine, senior policy adviser at UK manufacturers’ organisation EEF says that the difference is worrying. But he adds that it will take several more months before manufacturers will know for sure whether the chemicals they need have been covered.

’We don’t know whether it’s a cause for concern,’ says Dancet. The list of substances used for the estimate was put together from several different industry sources. ’There may be some exaggeration there,’ he adds.

Lloyd has some suggestions that could explain the discrepancy. In some cases, several substances may have contributed to the estimate but been merged together into a single registration due to essential similarities between them. In other cases, it may have been decided that a substance that contributed to the estimate was actually exempt due to its composition, the quantities in which it is supplied or its removal from the market.

But it could be that some companies simply missed the deadline. ’We want to get to the bottom of this clearly,’ Dancet says. ’We promised that to the downstream industry.’ The ECHA now needs to finish checking the dossiers for completeness. As the first deadline passed, 15,000 of the 25,000 dossiers submitted for the first deadline had been processed. Companies responsible for incomplete dossiers will get four months to submit additional information.

Meanwhile, national authorities charged with enforcing the Reach regulation are likely to see a spike in the number of complaints, says Mike Potts from the UK Health and Safety Executive. This is what happened after the pre-registration deadline. ’We’ve had a lot of carpet-bombing complaints from people trying to "shop" their competitors,’ he says. But most of the accusations investigated so far have been groundless. Potts says that, to date, only three prosecutions based on the Reach regulation have been initiated by authorities in the UK. The HSE itself has served notices to 30 companies, all of which are working towards compliance. ’There’s a lot of self-policing in the supply chain,’ he says. ’We get a lot of people confessing to their non-compliance as well.’

Industry in the round

Beyond the rarefied realm of regulation, the business of making and selling chemicals improved dramatically in 2010 compared with 2009 as the world recovered from the financial crisis.

In a December report, the American Chemistry Council (ACC) said that US chemical exports increased 17 per cent, offsetting ’soft’ domestic demand for chemicals. Exports were driven by favourable energy costs and growth in emerging markets, with production of chemistry-related goods increasing 12 per cent in 2010.

The ACC is touting natural gas from organic shale deposits as a ’game changer’ for companies in the US. The relatively new source has opened up access to plenty of low cost ethane, a common feedstock, and this is set to give them a competitive advantage internationally, it says.

The big companies are competing to cash in on the long term trend of growth in emerging markets and investment in China, which continued unabated in 2010. German chemical group Bayer said in December that it was planning to move the headquarters for its polycarbonates business to Shanghai and invest €1 billion (?840 million) in production of polycarbonate, methylene diphenyl diisocyanate for polyurethane and hexamethylene diisocyanate for coatings. French chemical company Arkema said in September that it is planning to build a $30 million (?19 million) plant in China to produce emulsion polymers for coatings and adhesives. 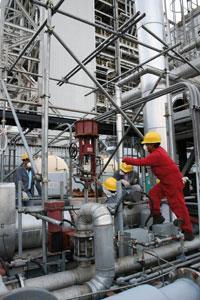 Chemical manufacturing has recovered in 2010

Chemical giant AkzoNobel expanded its Taixing monochloroacetic acid plant in April to a capacity of 60 000 tonnes per year and agreed to buy Chinese paint company Changzhou Prime Automotive Paint in September. In addition, in October it opened a powder coatings plant in the Wuhan economic and technological development zone. Meanwhile, German synthetic rubber manufacturer Lanxess started up its new plant in Shanghai, which now produces black iron oxide pigments. The list goes on.

In terms of mergers and acquisitions, activity seems to have risen in 2010. BASF completed in December its €3.1 billion purchase of speciality chemicals company Cognis and Dow sold its styrenics division, Styron, to Bain Capital for $1.6 billion.

Outside Europe, legislators will have watched the passing of the registration deadline with great interest. If the Reach regulation turns out to be a success, others may follow the same path. What will they have concluded based on 2010? The registration deadline may have been a success, but the journey there was a bumpy ride for some, particularly in relation to the controversial issue of data sharing. In order to minimise the duplication of work, companies were organised into groups called substance information exchange forums (Siefs) according to the chemicals to be registered. Therefore, every company - large or small - looking to register ethanol for example could join the ethanol Sief and in theory benefit from pooled resources. But this led to problems as competitors asked to work together in this way struggled to find fair ways to share data. There were arguments about among other things how to compensate the owners of the data and avoid the disclosure of sensitive information. Lloyd told Chemistry World   before the registration deadline that in some cases the lead registrant - the Sief member responsible for gathering and submitting the information on behalf of everyone else - was taking advantage of the looming deadline by ’holding people to ransom’.

Whether such problems persist remains to be seen. If they do, they could be magnified in the future. The deadlines in 2013 and 2018 will deal with chemicals supplied in smaller quantities and therefore involve a much wider range and consequently many more registrations. Nonetheless, 2010 was a big year for a big piece of legislation.

One in four firms not complying with chemical legislation

Inspection data suggests that a quarter of chemical companies have not been complying with the European chemicals legislation, Reach