A new system for cancer detection

While current cancer-diagnosis methods rely on an invasive biopsy or the detection of cancer-specific biomarkers, South Korean scientists have developed a simple and non-invasive detector for cancer cells that could speed up the early diagnosis of the condition, leading to a greater chance of survival for cancer patients.

Cancer cells have been found to differ from normal cells in several ways, including the make up of their cell membranes. Cancer-cell membranes have been found to contain more anionic lipids than normal cells, leading to an overall negatively charged cell surface. Yoon-Bo Shim and co-workers from Pusan National University, have exploited this negative surface charge to develop a probe based on daunomycin, an anti-cancer drug that is known to interact strongly with anionic lipids.

The detection system uses a daunomycin-specific aptamer that is covalently bonded to a conducting polymer layer. The polymer layer lies on top of a layer of gold nanoparticles, which are deposited on the surface of an electrode. In the solution to be tested, daunomycin binds to cancer cells and this cell-drug complex is then captured by the aptamer. The cancerous cells are then quantitatively detected by electrochemical impedance spectroscopy and fluorescence microscopy, with excellent selectivity. 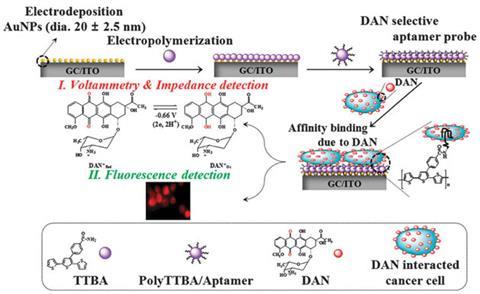 ‘The detection limit is excellent,’ Shim explains. ‘Using simple and cheap equipment, double checking is possible with electrochemical and fluorescence methods using a single sensor probe.’ Shim hopes that the technique could lead to a point-of-care cancer diagnosis from the analysis of bodily fluids, such as blood.

Annela Seddon, an expert in drug-membrane interactions at the University of Bristol, says ‘Whilst it remains to be seen how well this technique would distinguish small numbers of cells in the complex ‘soup’ of a genuine clinical sample, it provides a robust and useful weapon in the arsenal of detection techniques currently available’. 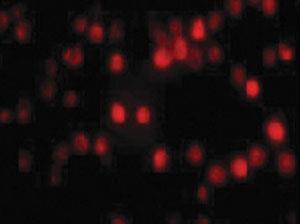 Shim’s team is planning to use this detection system in a real-life setting, specifically in the diagnosis of clinical patients. They also plan to investigate other anticancer drugs for potentially useful interactions that may lead to other types of probe.