The RSC has launched the Pan African Chemistry Network (PACN), an initiative which it hopes will promote scientific development and education across Africa.

The network will support African chemists via a series of conferences, workshops, educational outreach and exchange programmes. Grants and fellowships will support chemists to attend national and international meetings on such themes as sustainable agriculture, clean water and disease control, food security and enhancing biodiversity. 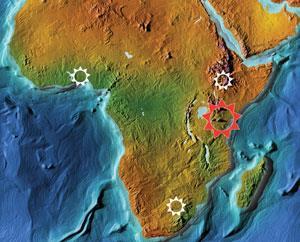 Kenya’s hub may be followed by satellites in Ethiopia, South Africa, and Western Africa

’The PACN is an innovative approach to working to support science and education in Africa,’ said RSC chief executive Richard Pike.

The first physical signs of the new network will be a PACN office based in the chemistry department at Nairobi University, Kenya. This first hub was created with a ?1 million grant from Swiss agrochemical company Syngenta, who are partnering the RSC on the initiative. Satellite hubs may later be established in Ethiopia, South Africa, and also Western Africa, explained Neville Reed, the RSC’s director of communications. ’The idea is to build a network of self-supporting chemists,’ he said.

Aside from travel grants, workshops and conferences - a meeting on biodiversity is being planned for the summer of 2008 - the network involves an educational outreach programme in both universities and schools. Sixteen thousand undergraduate-level books are already being donated to Nairobi and Addis Ababa University, Ethiopia; while the RSC envisages chemistry roadshows, and also support for UK students and teachers working in Africa.

The network builds on the February 2006 launch of the RSC’s ’Archives for Africa’ project, which gave over 50 developing countries free access to its journals back catalogue. On current figures, over 4000 articles will be accessed from Africa this year via the web archives.