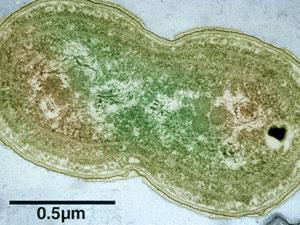 A mass-spectrometry technique that can characterise and spatially resolve the metabolites produced by bacteria could lead to a better understanding of how different microbes interact with each other, and how their chemistry could be harnessed industrially.

Of the thousands of chemical metabolites produced by bacteria, only a tiny fraction are accessible to the organic chemist using traditional synthetic techniques. Microbes can defend against attack with their own herbicides, pesticides and antibiotics, and encourage plants and animals that are beneficial to their survival by producing stimulants or substances that inhibit pathogens.

To see exactly how and where bacterial metabolites are produced and used, Julia Laskin and Ingela Lanekoff, of the US Pacific Northwest Laboratory, used nano desorption electrospray ionisation (nano-DESI) coupled to tandem mass spectrometry ­– an approach that doesn’t damage the sample being investigated.

Writing in Analyst, Laskin states ‘Nano-DESI is an ambient ionisation technique that enables detailed chemical characterisation of molecules from a specific location on a surface…  In this study we demonstrate for the first time the utility of the technique for spatial profiling of chemical gradients generated by microbial communities on agar plates.’

Laskin and Lanekoff used the new method to look at colonies of Synechococcus sp. PCC 7002 bacteria, and identified scores of metabolites and lipids, some of which had not been seen previously from the microbe. By moving the nano-DESI probe across the surface of the colony, chemical gradients of sucrose and glucosylglycerol (an osmoprotective compounds produced by cyanobacteria) were found, and seen to change over time, as if the species were moving gradually away from the microbes and into the surrounding agar. ‘Most likely the bacteria overproduce these molecules,’ Laskin told Chemistry World. ‘ Cyanobacteria are known to produce sugars and other organic molecules and are being used for biofuel production,’ she says.

Graham Cooks, one of the pioneers of DESI mass spectrometry, sees Laskin’s choice of analytical technique as ideal for the job. 'Like DESI itself, nano-DESI is tolerant of high salt concentrations and is particularly well suited to problems that require high spatial resolution; around a few tens of microns,” he says. 'Lipids carry a great deal of information on the state of a biological system and the study of bacteria in living colonies, as done by Laskin and her group, is a felicitous choice of problem that matches the capabilities of nano-DESI.'

Looking to the future, Laskin says that the technique could easily be extended to resolve chemical gradients in two dimensions. ‘We would like to do that, though it does take much longer and you always need to question whether it is really necessary. But when studying two different microbial species together, not just one as we have here, a two-dimensional ‘mapping’ approach can really help see what is going on, and how the chemical gradients depend on the distance between bacteria,’ she says.