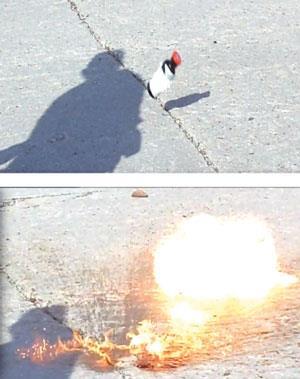 Researchers in Spain have developed a fast, non-hazardous method of identifying the anions present in improvised incendiary devices (a type of petrol bomb). This information will be important to police officers, as knowing the components of the original device could potentially help lead to the suspects involved.

Carmen García-Ruiz of the University of Alcalá, Madrid, and her co-workers studied a particular type of device – so-called chemical ignition Molotov cocktails (CIMCs), which consist of a flammable liquid (typically petrol) along with sulfuric acid and potassium chlorate in a glass bottle. Rather than needing to be lit by the thrower, the exothermic reaction of these ingredients on contact sets the mixture alight.

Talking about their lab samples García-Ruiz says: ‘With only 1ml of gasoline, the column of fire was about 1 metre high’, giving some indication of the potential for damage and injury caused by these devices, which she says are seeing increasing use in violent disorder and terrorist attacks.

The team found that using a capillary electrophoresis separation with a pyromellitic acid buffer, various anions present in the CIMCs could be separated, notably the perchlorate ion. Perchlorate is not normally found in the environment and therefore does not suffer from the contamination problems encountered by the more ubiquitous sulfate and chloride ions. Another advantage is speed. ‘By applying this method, it is possible to separate the most significant analytes in a few minutes,’ says García-Ruiz.

Paul Haddad, an expert in forensic analysis at the University of Tasmania, Australia, says that while the devices under study are much simpler than the improvised explosive devices that he works on, he ‘hasn’t seen fingerprinting done on improvised incendiary devices before, so I think that’s definitely an advance’. Although he does add that ‘being able to detect perchlorate is not extremely difficult’. Haddad also comments: ‘To do this in the field, you need a portable capillary electrophoresis instrument.’ He suggests that adapting the method to a portable device would be a sensible next step for the research.